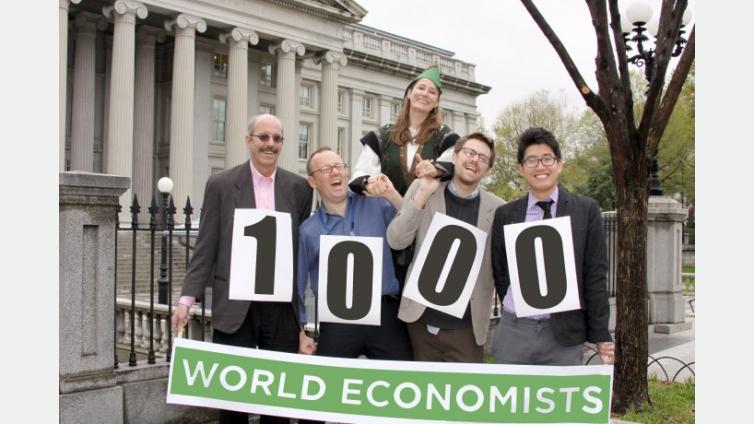 Economists are notorious for not being able to agree on anything. But today, a thousand economists from 53 countries have written to G20 finance ministers and Bill Gates calling on them to introduce financial transaction taxes to tackle global poverty and climate change and help people hit by the economic crisis.

The letter, which has appeared in  The Guardian and The Telegraph, was delivered to G20 finance ministers ahead of their meeting today in Washington. It was also addressed to billionaire philanthropist Bill Gates who has been asked by the G20 to examine innovative ways to fund development and climate change. It is the latest sign of increased support for financial transaction taxes which are supported by a growing number of governments including France and Germany.

Professors from many of the world’s leading universities, including Harvard, Oxford, Cambridge and the Sorbonne have signed the letter. Signatories include Jeffrey Sachs, Director of the Earth Institute at Colombia University and influential advisor to UN Secretary General Ban Ki-moon; Dani Rodrik from Harvard; and Ha Joon Chang from Cambridge.

Professor Sachs said: “It is time for the G20 to agree to a tax on financial transactions to help poor countries struggling with climate, food, and economic crises they did nothing to cause. The tax would also be a fair and efficient way to help close budget deficits in our own countries as well.”

In Washington, leading advocates of a Robin Hood Tax met with Christine Lagarde, French Finance Minister, to hand over the letter. Peter Bakvis, Director of the Interational Trade Union Confederation and one of the economists who signed the letter, along with Luc Lampriere, Director of Oxfam France, presented the letter to the French Finance Minister at the French embassy in Washington.

The letter to the G20

We write to you as the call for a Financial Transaction Tax is now gathering global momentum, and the French government has made it a key priority for their G20 presidency.

Even at very low rates of 0.05% or less, this tax could raise hundreds of billions of dollars annually and calm excessive speculation. The UK already levies a tax on share transactions of 0.5%, or ten times this rate, without unduly impacting on the competitiveness of the City of London.

This money is urgently needed to raise revenue for global and domestic public goods such as health, education and water, and to tackle the challenge of climate change.

Given the automation of payments, this tax is technically feasible. It is morally right.

We call on you to implement the FTT as a matter of urgency.

1000 Economists Back the Robin Hood Tax.pdf