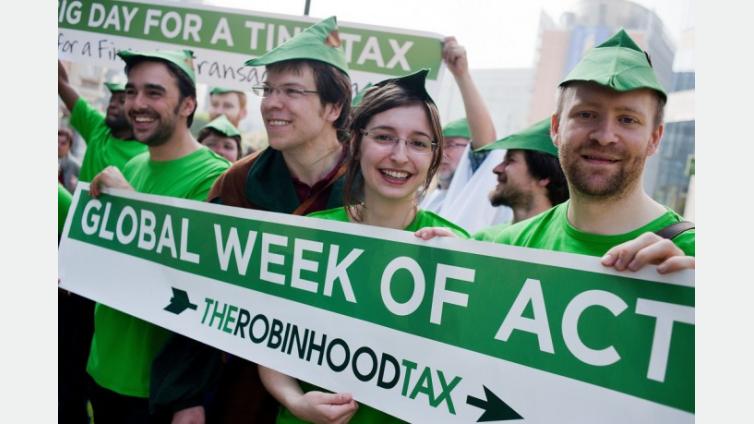 2012: We couldn't have done it without you
Robin Hood
Action
International
Tweet

What a year! There have been some huge developments for the Robin Hood Tax campaign over the past 12 months, and we couldn't have done it without you. We've had MPs championing the Robin Hood Tax thanks to your pressure, financiers signing up in support, Bill Nighy out in Malawi and the launch of the US campaign. It's certainly been busy in Sherwood.

So, here's a run down of what has happened in 2012 with your support. And we would be lying if we said we aren't very excited about what 2013 may bring...

Over in Europe, leaders were showing the UK how it can be done. Merkel and Sarkozy decide it's time to implement a European Financial Transaction Tax (FTT) before the end of the year. Support grew further as new Spanish Prime Minister Mariano Rajoy announces that Spain is in. With Italy, France and Germany already signed up, the UK becomes the only Government amongst Europe's five biggest economies not to back the tax.

In an unexpected moment, President Sarkozy claims it is “unacceptable” that there are no taxes on financial transactions and that France will implement its own tax even if European countries prefer to wait. Vive Robin des bois!

The team of European countries pushing for a financial transaction tax grows to 9. The finance ministers of France, Germany, Austria, Belgium, Finland, Greece, Portugal, and Spain write to the European Commission requesting an FTT as quickly as possible.

Back on UK soil some more good news. Carwyn Jones, the First Minister of Wales, announces his support for the Robin Hood Tax. He's the first government leader in the UK to come out in support of the tax, joining the growing ranks of business, political and civil society leaders across the world who are backing this tiny tax on financial transactions to generate money to tackle poverty at home and abroad and climate change.

A new report by economist Avinash Persaud shows the net effect of a financial transaction tax on UK GDP is likely to be +0.25% - the equivalent to 75,000 jobs, having an overall net positive impact on the UK economy - great news!

On budget day Robin Hood tax supporters joined demonstrators outside 10 Downing Street to ask Osborne to tax the banks, not the poor and help to redress the balance of both UK and global inequality.

A flurry of good news for April. A survey found that 62% of Scots support a Robin Hood Tax. So Robin Hood Tax coalition members SCIAF called on supporters and the Scottish public to take action by signing postcards, sending emails and writing letters to the PM, to make sure he can’t ignore the huge support north of the border for a Robin Hood Tax in the UK .

In England, The UK’s most senior Catholic urges David Cameron to implement a Robin Hood Tax in the UK. Cardinal Keith O’Brien branded David Cameron and his government’s opposition to a Financial Transaction Tax to help combat poverty as ‘shameful' in a BBC Scotland interview.

Campaigners arrived at the annual Barclays AGM to demand a Robin Hood Tax on the banks. Research shows that each Barclays investment banker received an implicit subsidy of £420,000 from the Government in 2011. That’s enough to pay 17 nurses to work for a year and we made sure Barclays knew we meant business.

May - the busiest month yet! For one week thousands of campaigners from around the world took action in 35 different countries to call on leaders to support a Robin Hood Tax ahead of the G8 and key EU Summits. This week of action saw over 500 blogs go out in support of the campaign.

Over in the USA in the build up to the G8 Summit, thousands of nurses wearing Robin Hood hats marched through the streets of Chicago to demand a Robin Hood Tax from world leaders.

A group of independent United Nations experts urged leaders to adopt a Financial Transaction Tax as a 'human rights imperative'. They asked the EU to take the lead in promoting the adoption of a global financial transaction tax to offset the costs of the enduring economic, financial, fuel, climate and food crises, and to protect basic human rights.

Some further research from the European Commission states that a Financial Transaction Tax could increase economic growth in Europe, and in the UK, supporters head to the Royal Bank of Scotland AGM to demand a fair tax on the financial sector.

An exciting month across the board as the USA campaign launches with actions happening all over the USA.

52 financiers write to David Cameron and other European and world leaders calling on them to back Financial Transaction Taxes to raise revenue for “people in urgent need at home and in the world".

Ahead of the annual Mansion House Bankers' Banquet, Robin Hood Tax campaigners hold their own feast at the Royal Exchange to highlight the cost to ordinary people of the financial sector's "success".

After blocking from the UK and other countries, 10 European countries agree to press ahead with plans for a financial transaction tax using the procedure called 'enhanced cooperation'.

In July banking scandals were rife. We heard that Bob Diamond would be at the Treasury Committee hearing, so we popped down to see him and ask for our cash back.

At RIO+20 financial transaction taxes were discussed by various groups during the UN conference on sustainable development, confirming that an FTT could finance climate change initiatives.

The United Nations show their support in calls for a Financial Transactions Tax in the annual World Economic and Social Survey. The UN calls for an international tax to raise $400 billion to finance development needs.

Momentum continues in the USA as thousands of supporters rally at the 19th International AIDS conference in Washington DC to demand a Robin Hood Tax.

Big cheers as the new French Prime Minister Francois Hollande implements a 0.2% financial transaction tax. Leaping ahead of the curve, France shows the rest of Europe that there is no time like the present and that we need to take action now.

In an exciting development in the USA, Bill HR 6411 is introduced in Congress, which includes a call for a Financial Transaction Tax.

October saw the EU financial transaction tax get a step closer to reality with 11 EU countries being  granted permission by the European Commission to take the next steps of 'enhanced cooperation'.

Green hats were present at the UK Labour conference! Teaming up with Compass and the Cooperative party we put on 'Ideas for a Fairer Economy', an event complemented by hundreds of copies of 'Not the Financial Times' handed out to attendees. Set in 2015, the Fake Financial Times shows what a difference could be made if Labour supported a Robin Hood Tax . (Bob Diamond releasing a chairty single is far less likely however)

Robin also turned up with a bunch of unruly Bankers outside the British Bankers Association annual conference, to remind them that their play time is over.

Our very own Bill 'the banker' Nighy visits Malawi to see what difference a Robin Hood Tax could make in terms of aid and maternal health for those who need it most.

Young activists at the climate talks in DOHA made sure that the Robin Hood Tax was not forgotten as a viable source of climate finance.

And ending the year on a high with some excellent news: The European Parliament voted overwhelmingly (by a massive 6 to 1 in favour) for 11 countries to proceed with implementing the financial transaction tax using 'enhanced cooperation'. Brilliant!

We have some exciting developments in store, both in the UK and the EU, but we need your help!

In early 2013 we'll be asking you to bring the Robin Hood tax home to highlight just what a difference the tiny tax could make in your community.

Along side this, the UK government can't ignore the exciting activity in Europe – with 11 countries lined up to begin the process of a financial transaction tax as soon as possible.

Together we can make sure the government knows the Robin Hood Tax is here to stay – and it's time for them to listen to our calls.

Happy Holidays from all in Sherwood.

Previous : European Parliament votes overwhelmingly for a Robin Hood Tax
Next : Watch this space – Robin Hood coming to a local council near you