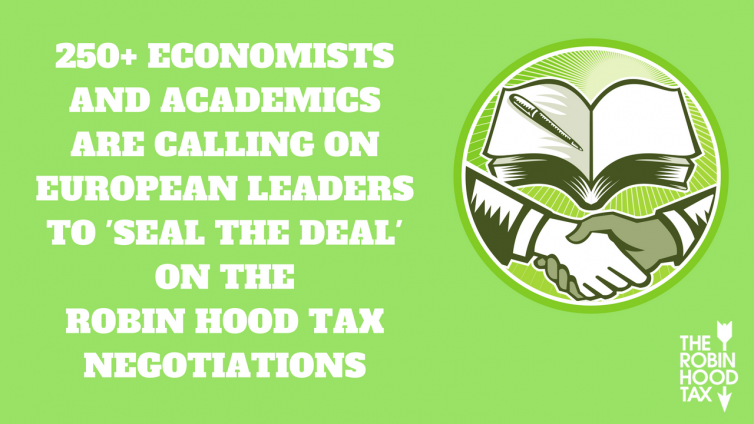 With negotiations for the world’s first regional Robin Hood Tax “99% done” (according to Austrian Finance Minister Hans-Joerg Schelling), more than 250 economists and academics are calling on the 10 finance ministers involved in the talks to finally seal the deal on Monday.

Representing 23 countries, the signatories have written to the leaders and finance ministers of Austria, Belgium, France, Germany, Greece, Italy, Portugal, Slovakia, Slovenia and Spain urging them to ‘make history by implementing the FTT now’, arguing that it is “technically feasible and economically and socially desirable”.

The European FTT campaign makes it clear that any further delays to talks that have lasted five years would be unacceptable. After more than a million actions backing the idea last year, and 6,000 organisations representing 140 million people demanding a resolution that benefits people and planet, there is no more time to waste.

We’ll need your help to let ministers know that we’re watching them on Monday. Please Tweet at them now to make sure they get the message.

To the Heads of State and Finance Ministers of EU FTT Nations.pdf

Join the call to Seal The Deal.

Previous : “It's an idea whose time has come”
Next : Core Agreement Reached on European Robin Hood Tax