Ahead of a week of summits, campaigners will be making the case for a Europe-wide financial transactions tax 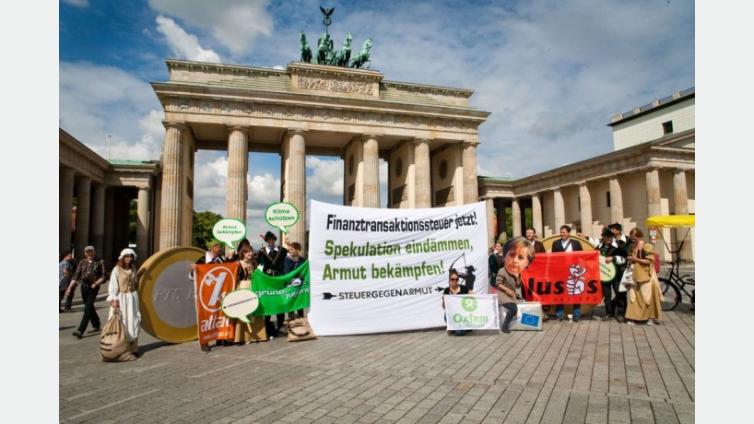 Ahead of a week of summits, campaigners will be making the case for a Europe-wide financial transactions tax
Robin Hood
International
Tweet

Last year, the European Commission proposed the introduction of a financial transactions tax, which could raise up to €60 billion annually. While many European economies are likely to introduce such a tax, some, such as the UK are opposed. Ahead of a week of important summits in Europe and elsewhere, Owen Tudor argues that this is the perfect time for pro-‘Robin Hood Tax’ campaigners to push their message.

This is a big week for a tiny tax. Over the next week, trade unionists, green groups and international development charities all over the world will be stepping up the campaign for a financial transactions tax. On Wednesday 23 May, the European Parliament will vote on the issue and it will be discussed at a summit of European heads of government. Yet the British Government continues to oppose the tax.

Financial transaction taxes (FTTs) exist in one form or another in 16 of the G20 countries, including the UK where stamp duty on share transactions raises over £3billion a year. Robin Hood Tax campaigners want to see these taxes extended to cover currency transactions, derivatives, options, swaps and all the other lucrative but exotic financial products that are currently significantly under-taxed. We want the revenue raised to be used to combat poverty at home and abroad, and to tackle climate change.

FTTs would also contribute to other policy objectives, such as tackling the widening inequality that did so much to cause the global financial crisis, and rebalancing the economy from finance to manufacturing. They would also reduce the attractiveness of the risky and unproductive high frequency trading which has undermined longer-term investment strategies and increased the risk of ‘flash crashes’ where trading computers chase their own tails in a super-fast collapse in share prices which can wipe billions off stock values in minutes.

At European level, the Commission has proposed an EU-wide tax at very low rates (between 0.1% and 0.001% compared with UK stamp duty of 0.5%) which could raise up to €60billion a year for global public goods. Because of UK opposition – based on defending the interests of highly paid City of London financiers, rather than the interests of British businesses and taxpayers – it is unlikely that the tax will cover the whole EU. But a smaller group of countries, including four of the five largest economies in Europe (France, Germany, Italy and Spain) are likely to go ahead and introduce an FTT under a procedure known as enhanced co-operation.

Ironically, although that smaller scale FTT will only raise about €40billion a year, up to half of that will come from trades taking place in London, despite the UK Government’s refusal to take part. All the UK Government is likely to achieve is reducing the resources available for good causes overall, and preventing British taxpayers from reaping any fiscal benefits.

Campaigners for the tax will be making the case to politicians gathered in Chicago for the NATO summit next week, in Guadalajara for the G20 employment ministers’ meeting this week, at the Paris ministerial meeting of the OECD next week, and in Brussels at the EU leaders’ summit next Wednesday. A Robin Hood Tax would do immense good, and it’s backed by majorities of the voting public all around the world. It’s time politicians started putting such a good idea into practice!

Owen Tudor is head of the TUC’s European Union and International Relations Department.

Previous : As Europe looks set to back a Robin Hood Tax, Osborne remains on the side of the 1%
Next : ‘As serious as a heart attack’: Robin Hood Tax Global Week of Action