Australia's nurses send a message to the G20 – a Robin Hood Tax for healthcare now!

Nurses have joined the tour across Australia (culminated at the G20 in Brisbane), backing the call to world leaders for a Robin Hood Tax to fund healthcare 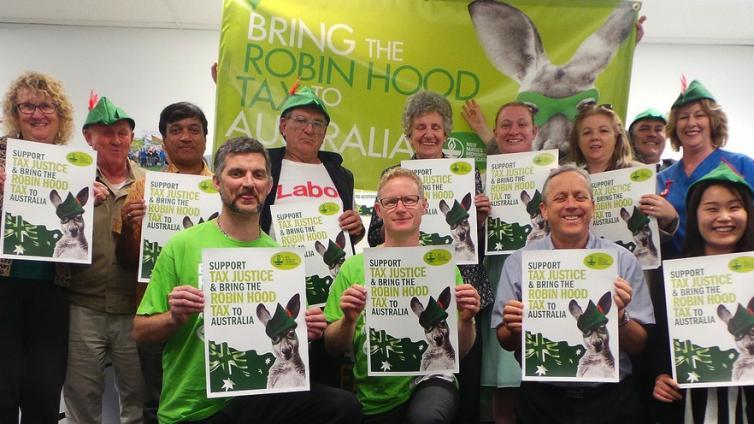 While the Australian Government is threatening to raise VAT and is embarking on the privatisation of public health services, world leaders are meeting in Brisbane, Australia for the G20. But they're all saying the same thing: the path to growth is austerity and privatisation; the ingredients for further inequity.

The New South Wales Nurses and Midwives Association (NSWNMA) and the Queensland Nurses Union (QNU), together representing over 110, 000 members, have no choice but to fight for a Robin Hood Tax to support universal healthcare. Collectively, we have raised concerns about health funding cuts in Australia, privatisation of public hospitals and services, coupled with the dismantling of state-supported healthcare and the intrusion of private health insurers into medical decision-making.

Over ten days we travelled more than 1500kms to get to the G20, generating discussion in communities on the merits of a Robin Hood Tax. General Secretary of the NSWNMA, Brett Holmes, said rather than increasing VAT, which would further hurt low and middle income earners, the Australian government needs to take tax reform seriously.

“The Prime Minister called for a measured debate on tax reform, and we have responded to this by raising awareness of how a Robin Hood tax would stop our public health services from shifting further down the track of a two-tier, Americanised health system”.

“As nurses and midwives, we are calling on all G20 leaders and government representatives to put patient safety and quality of care at the forefront, as a basic human right.”

The tour culminated in a forum in Brisbane which explored the impact of privatisation on healthcare and the importance of publicly owned universal healthcare. We heard from healthcare workers in Liberia, Nigeria, US and Australia, who contrasted abilities to respond to disease outbreaks such as Ebola. The forum concluded that G20 needs to make the right decisions for the health of our communities, including tax justice, the Robin Hood Tax and an end to austerity and privatisation.

The G20 is under way and nurses and midwives from across the world will continue highlight the need for a Robin Hood Tax through a peaceful and unique approach.

Previous : Robin Hood and the Fight against inequality
Next : A Great Year in Sherwood!