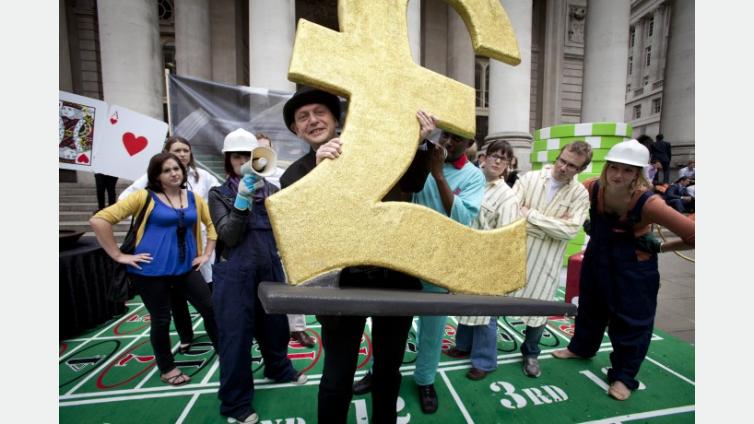 Yesterday, as bankers prepared to quaff champagne at the annual Mansion House banquet, the Robin Hood Tax campaign set up its very own super casino opposite to remind them of the real life consequences to their reckless gambling. The event, which saw the casino take over the Royal Exchange in the City of London, appeared on all the major news channels, including the BBC, Channel Four and ITV.

While cameramen and photographers scrambled to get the best shots, ‘bankers’ bet monopoly money on health workers, patients, public service providers and mortgage owners, who stepped onto a life-sized roulette board to take their chances. Looming above them was renowned artist Peter Kennard’s image ‘Bankers Place their Bets’, which depicts bankers using an African child as a chip in a game of roulette.

George Osborne used his Mansion House speech to announce plans to separate casino from retail banking, but the event served as a reminder that the chancellor needs to go further. It is time for the banks pay their fair share to make amends for their reckless game that has affected the lives of millions of people in the UK and across the world.

Previous : Update: Is A Robin Hood tax possible?
Next : Why the banks' threats of moving abroad are empty