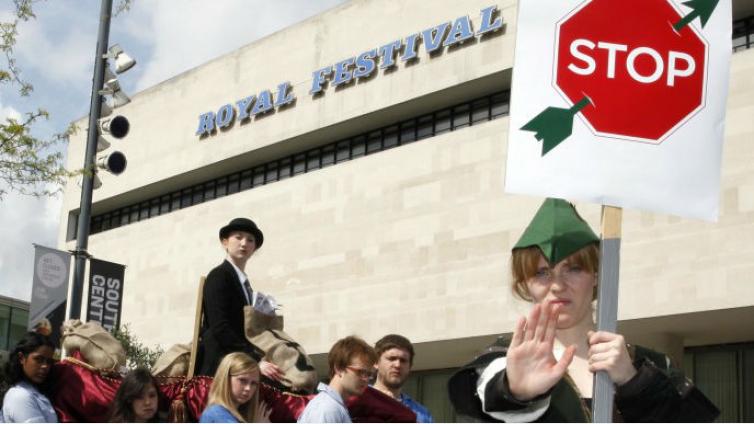 On her way to the Barclays Annual General Meeting (AGM), it seemed life couldn’t be better for the banker. As she travelled in on a throne carried on the backs of eight sullen nurses, she found difficult to choose what she was most looking forward to…

Would it be the huge bonus coming her way (up 13% this year)?

Or perhaps it was the bloated salary that she was going to receive?

Or maybe the idea that, despite Barclays’ profits being down by a third, they would get away with it?

After all, as a member of the banking elite, she hasn’t had to deal with the cuts that ravage the public sector – those same austerity measures that continue to rob from the public to give to the rich.

But she was about to face a rude awakening from our very own Robin Hood, who came with a simple message: STOP NOW!

Before the AGM, the banker ran amok, swigging champagne and making it rain money over the sullen group of NHS workers. But our hero in Lincoln green didn’t stand idly by. Complete with a stop sign, Robin stood ground against the banker, demanding she explained why the public should pay for financial sector excess, especially when Barclays’ bonuses - since the financial crisis they helped to cause – have come to a total of £9 million!

Needless to say, our banker swiftly got the message: ‘enough was enough’. If they can afford these outlandish pay-offs, they can afford a Robin Hood Tax: a tiny tax on the banks to help pay for public services and the fight against poverty and climate change.

As delegates filed in to the auditorium (with Robin Hood Tax leaflets in their hands) we think they got the message as well.