Bonus Season Is Here. Time to 'Bill The Banks' 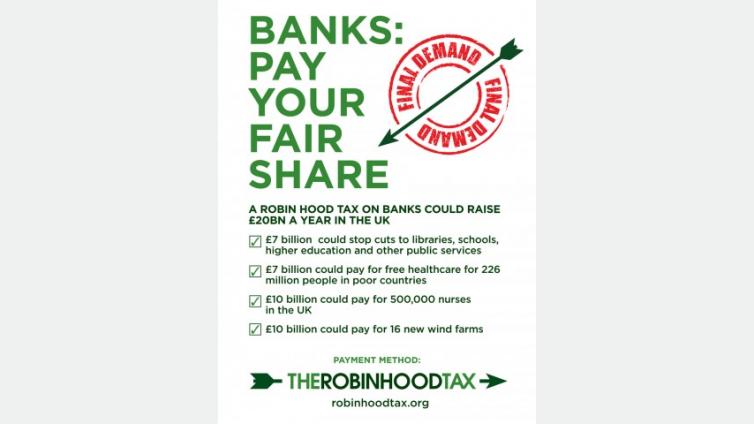 Bonus season is upon us – let’s make it count.

During the next few weeks, UK banks are expected to announce bonus pots totalling £6bn and billions more in profits. This follows similar announcementsin the US, confirming banking’s position as the most profitable industry in the world.

Few would argue with the Government’s promise to share the burden of the economic crisis. But as unemployment rises and public services are cut, ministers’ words that “we are all in this together” are being undermined by the vast profits and bonuses in the financial sector.

Banks are only able to make these profits and pay these bonuses because they are effectively underwritten by the Government. That does not just apply to banks, such as Lloyds and Royal Bank of Scotland, that were directly bailed-out by the taxpayer. Without these bailouts the whole banking sector would have been devastated.

Today Barclays announced they were increasing pay and bonuses for staff by 20 per cent.  It is outrageous that while the rest of the country struggles to make ends meet, bankers at Barclays are lining their pockets. These figures confirm that Project Merlin offers nothing more than the illusion of restraint. The only way to make banks behave responsibly is to increase tax so that we all get the benefits of their excessive profits.

As part of a global week of action supporters of the Robin Hood Tax campaign will be taking their message directly to UK banks, targeting those with casino operations. We need your help.  Please come and  ‘bill the banks.’  We will be there with leaflets, banners, and some hats – but we need merry folk to join us and send a clear message to the Government.

Tomorrow we will be taking action simultaneously up and down the country in London, Glasgow, Cardiff, Portsmouth, Bristol, Hereford and Wilmslow (George Osborne's constituency).

Throughout the week there will be similar Robin Hood actions taking place in at least 20 countries including Australia, Austria, Belgium, Canada, Germany, Norway, the US, Mexico and Senegal.

Find out when and where >>

Previous : Are British Banks Getting Billions in Hidden Subsidies?
Next : FTT Debate in Parliament