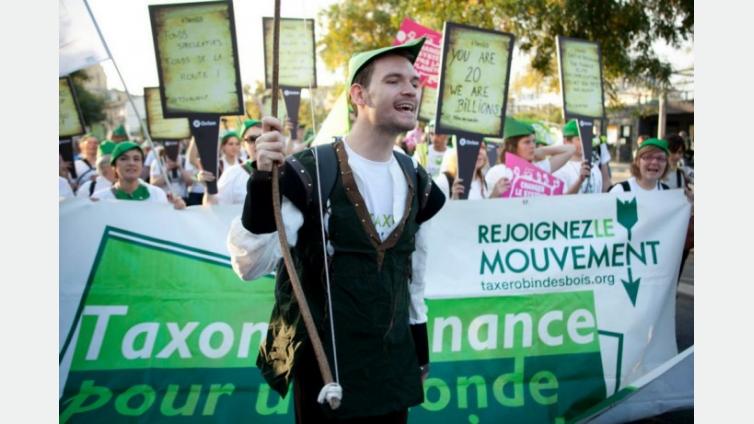 It's hard to believe that in three short years this idea has travelled from the back woods of Sherwood to the board rooms of Government. And we couldn't have done it without you.

It hasn't been easy, and it's still all a little confusing, so here is everything you need to know about why this is a big deal:

Which countries have signed up to the tax?

What does 'signing up' mean?

Unfortunately not all countries in Europe wanted to implement a Financial Transaction Tax (we're working on it!), but the good news is, as long as enough countries are interested they can forge ahead anyway. It's organised via the European Commission (the brains of the EU) and it's called... drum roll please... the 'Enhanced Cooperation Procedure'. There's a minimum requirement for nine - we now have seven plus another four have indicated they will sign up which takes us over the finishing line.

France in fact was ahead of the game and has already started theirs. Vive le france!

How much will be raised?

It's hard to give final figures as we don't yet know the detailed design, but it will be tens of billions of euros a year. Big money that can make a big difference. If you're interested to see what this means at a country level check this infographic....

Will the money go to good causes?

This is the big question – will it be just a new tax, or go towards fighting poverty and climate change and be worthy of the name Robin Hood? It's up to each country to decide and some leaders have already been flashing their green tights and saying this is possible.

But we must keep up the pressure in the coming months. We can't let the money just be used to bail out the banks next time they get things wrong – the thought's enough to make our green blood boil!

What are the next steps?

The next steps will be to make sure the UK Government knows we're serious about this tax. It's a much needed alternative to austerity and can help raise tens of billions of pounds to help those living in poverty both in the UK and abroad.

What does this mean for the UK?

It isn't just the Autumn that will be making Cameron feel chilly. Britain's refusal to back the tax has left them very much out in the cold as Europe moves to make banks pay their fair share.

The good news is this super-group of European countries proves what we knew – this tax is a great idea, it can be implemented and it doesn't need to be global to work.

We must keep up the pressure and ensure the UK Government join the newest and merriest band in town. Email your MP >>