BringRobinHome Takes a Trip to the Seaside 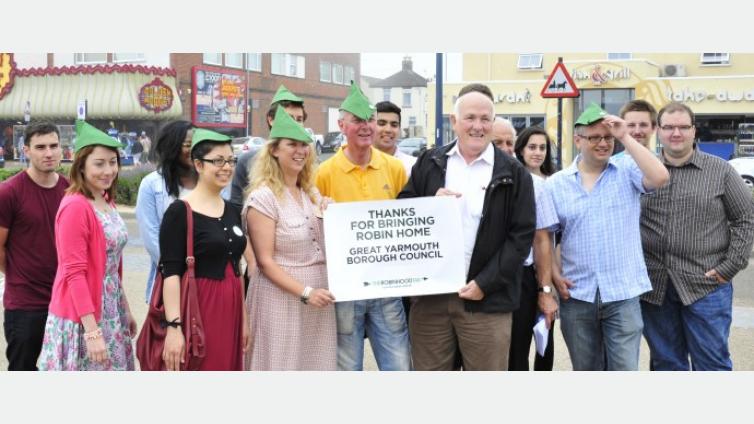 In light of last week’s sweltering heatwave, Robin has decided to take to pack up the green tights and head to the coast. This week we recorded four new councils up and down the English seaside joining the call to Bring Robin Home.

Setting off from East Anglia, Great Yarmouth’s council  has found itself in the unenviable position of having seen the deepest cuts to spending power of any district council in the country, with a 19% reduction in its budget.

Leader of the Council and the councillor who tabled the motion, Cllr. Trevor Wainwright stated, “the cut in funding to Great Yarmouth Borough Council and other local authorities could be stopped if the Robin Hood Tax was adopted, generating billions to protect local services and jobs”.

“The great thing about Robin Hood is that he stood for fairness. In Great Yarmouth I speak to people struggling every day that's why we need to create a fairer, better place for people to live.

Great Yarmouth has been hit harder than anywhere else in the country. It's not fair that working families struggle, pensioners miss meals and children go without. I don't want to rob from the rich and give to the poor, I just want those with the broadest shoulders to carry the biggest load”.

Next stop was Hastings, where the south coast meets the east. Hastings Council - the 17th most deprived council in the country – has also found itself in the top ten most cut boroughs in the UK. It stands to lose £7.2 million over the period of 2010/11 through 2015/16, representing a loss of some 56.7% of its previous grant allocation.

The vote enjoyed support from a variety of parties, after being proposed by Labour.

We were delighted at the news that Portsmouth City Council supported our BringRobinHome campaign, representing our first Liberal Democrat-led council in the UK. The motion called for the recognition that financial stability is necessary if services to the community are to be funded to former levels and called for an FTT being imposed on all transactions above an agreed threshold.

Head of the Council, Cllr. Gerald Vernon Jackson: “Such a tax should be designed to encourage long-term investment, be a disincentive to short-term financial movements and reduce exchange rate volatility”.

As we travel in to the South West, we arrive at our final destination: Plymouth.

The motion was proposed by Labour Councillor Nicky Williams, Cabinet Member for Children and Young People, who said: “Local government has seen massive real term cuts in central grant funding under the Coalition over the last few years and this places extreme pressure on our budgets.

“Many of these cuts have had a direct detrimental impact on the city’s most vulnerable and needy residents. For example, the introduction of a local Council Tax Support scheme, with less funding, providing less benefit to those people who are struggling to pay their daily living expenses

“There are better, and fairer, ways of generating central government revenue that will ease the need to squeeze local government to the point of crippling front line services and vital support to our citizens.

"I hope the Government will listen to this growing voice across the UK and Europe and do the right thing.”

We couldn’t agree more and would like to thank our supporters and the councils for getting behind the campaign. In the last month, councils representing three million Britons have signed up to demand a Robin Hood Tax in the UK: your voices are being heard.