Campaigning for and against a Robin Hood Tax 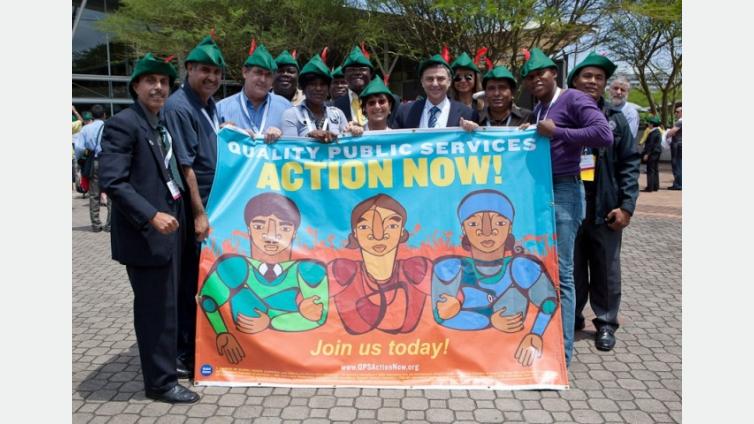 By Owen Tudor,  Head of European Union and International Relations at the TUC.

Over the last week, Europe has moved a little closer to a Robin Hood Tax on financial transactions, and the usual suspects have been engaged in ever more desperate attempts to defend the indefensible and throw a spanner in the works of the campaign which aims to make the finance sector that caused the crisis actually pay for it, and behave better in future.

Most of the attacks on the European Union financial transactions tax (FTT) have been covert and downright sneaky. Whereas campaigners for the tax – like these AIDS activists who invaded Republican Speaker of the US House of Representatives Boehner’s office in Washington DC this week – have nothing to hide!

What actually happened? Campaigners at the Public Services International world congress in Durban, South Africa, showed how much unions support the Robin Hood Tax, with a thousand lincoln green hats on display. Oh, and the Economic Committee of the European Parliament agreed to recommend to the full plenary the week after next that the Parliament should give its blessing to the plans of 12 countries representing 95% of eurozone GDP to move ahead an introduce a common FTT raising about €37 billion a year. Greek socialist MEP Anni Podimata, a long-time proponent of the tax, explained why the EP’s Economic Committee had voted 32:6 in favour.

The Italian Government finally admitted what we’d known for some weeks, that they had decided to follow the French in unilaterally introducing an FTT ahead of the European tax coming in. And although the Finnish governing coalition split down the middle, three parties on either side, so won’t be joining the 12, they agreed not to block the plans of their fellow governments. But someone was planning to do just that….

Despite publicly saying they don’t care if the rest of Europe wants to introduce an FTT, the British Government has in fact been approaching other governments in secret asking them to help scupper the tax. Under EU rules, if a group of countries want to do something like this together, they need the permission of the rest. No veto is possible, but a small blocking minority can prevent others proceeding. To do so, the UK needed Poland’s backing. They didn’t get it. So the process, known as the Enhanced Co-operation Procedure, will go ahead.

Meanwhile, a German business magazine reportedly quoted Finance Ministry official Michael Sell saying that a European Robin Hood Tax would not be in place by 2016 and might well be watered down. We have lost count of the times German officials (and even Ministers) have been quoted as saying that Germany had abandoned calls for an FTT, or were agreeing all sorts of compromises. None of them turned out to be true – the product of fevered journalistic imaginings, mishearings or – as we suspect is yet again the case – deliberate misrepresentation by FTT opponents.

And finally, yet another example of corporate chutzpah. The Chief Executive of the London Stock Exchange, Xavier Rolet, offered Italian Prime Minister Mario Monti some friendly, and some would say neighbourly, advice. He told the renowned economist who, as it happens, studied under James Tobin (for many years considered the author of the FTT although actually it’s all in Keynes), that the tax would be “an error.” What could be more helpful … until you remember that the London Stock Exchange owns the Italian version, the Borsa Italiana, where the taxable shares and derivatives are traded. And suddenly everything becomes clear.