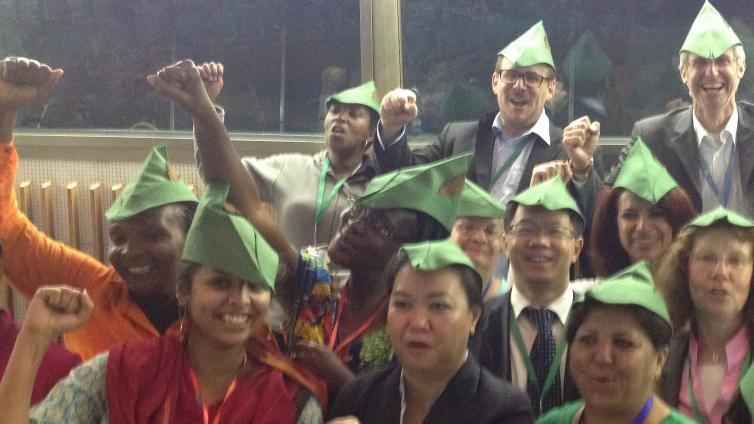 I’ve just come back from a hectic few days in Africa, in Addis Ababa to be exact - on behalf of the Robin Hood Tax campaign – participating in the 3rd International Conference on Financing for Development (FfD). The event was massive - 5000 people from 190 countries descended on Addis to commit to steps relating to development goals including education, clean water, healthcare as well as fighting the serious effects of climate change. That was the idea anyway - let me tell you how it played out.

The conference opened with UN Secretary-General Ban Ki Moon laying it on the line. "Without resources", he said, "commitments will amount to little more than promises on paper". And getting more resources is exactly the reason I have come to Ethiopia. To launch an international declaration for countries to sign to back ideas like the Robin Hood Tax that can generate huge sums of money to save and improve lives. Listening to Ban Ki Moon’s words in the opening session, I felt proud to have been selected to occupy the 'Civil Society' chair (out of the many hundreds of civil society representatives, who had travelled to Addis). Robin was very much in the room!

As I left the venue for the day, I reflected on my journey to Ethiopia: from a madcap dash to Heathrow airport (during a tube strike) to a 7-hour sleepless, overnight flight. And at first sight of my lodgings in Addis - ‘The Caravan Hotel' -, how my heart had sank. It was a derelict building site! Suddenly, I understood the name 'caravan' hotel: "Oh no”, I thought “I'm going to be living in a caravan for a week!” But as we pulled past the skeletal structure, it became clear this was the (as yet) unfinished extension to an actual, real, hotel. I was mightily relieved when the taxi door was opened by a friendly face welcoming me.

I found myself at one of the conference’s many side events where renowned Sherwooders, Nobel Prize-winning economist Joseph Stiglitz and the head of Oxfam International, Winnie Byanyima, spoke impressively.

Joe Stiglitz set out that 'financing for development' should not be mistaken for aid from rich countries. After all, 80% of money used to finance development in developing countries is generated in the countries themselves.

Not only have the vast majority of rich countries let down poorer countries with their inability to meet their longstanding promise (made in 1970) to devote a small portion of their national income as aid, these same rich countries continue to inflict great harm on the poorer ones. This is because, he explained, poor countries are firstly unable to capture the tax they need from business activities that happen on their soil and, secondly, because they do not receive a fair deal for the minerals that are taken from their ground.

Winnie from Oxfam expanded that theme describing how developing states lose $100 billion a year in unpaid taxes, which is made much worse by the further $138 billion a year lost when global corporations demand special tax arrangements as a condition of operating in their countries. "This is plain robbery", she concluded.

The amount of money lost this way for developing countries far outweighs the amount of aid they receive. This is why the main demand of many of the campaigners in Addis was for an international tax body based at the UN to finally bring some fairness to the global tax system.

It is why the complete picture of the financing for development agenda is not simply about more aid, but also changes to the financial system, specifically the taxation system. Poorer countries need to collect money - that should by all rights be theirs - to finance their own development.

Robin on a mission

Whilst the main battle for the ‘tax body’ was being played out in the conference centre, I focused on how Robin could win in this crowded, chaotic environment. Alongside the main conference, there were many meetings on particular topics (known as side events).

Our approach was to offer countries the chance to publicly support the Robin Hood Tax by means of a declaration they could sign up to. A number of countries warmed to the idea and at a packed side event, France, Chile, Korea along with the Secretary General of the 80 French-speaking countries (such as Senegal and Mali) signed up! At its launch, to already have countries from 4 different continents signing the declaration was an excellent start! Thus I found myself signing the declaration on behalf of civil society alongside the French Development Minister, Annick Girardin, as a swarm of photographers pressed forward (cameras flashing) and Robin Hood campaigners from many countries cheered the news (see picture above).

But this is just the launch of the Robin Hood Tax declaration: it remains open for signature all the way to the massive climate change conference in Paris in December. We hope many, many countries will sign up between now and then and Robin campaigners from around the world can encourage them to do so.

As the conference drew to a close, to the disappointment of the many tax campaigners present, there was no agreement for the ‘international tax body’ they had been working so hard to achieve. Their only consolation – though it is a significant consolation – is that the issue of tax (of the hundreds of issues discussed in Addis) dominated the talks and all countries know the issue will not go away until tax fairness is established internationally. It is no longer a question of ‘if’, but a question of ‘when’. And the next major moment for discussion will be in New York at the UN General Assembly meeting in September.

As for us Sherwooders, we should be pleased to have launched such an important initiative as the Robin Hood Tax declaration, which will grow from strength to strength in the months to come and strongly increases the likelihood of extra funds being raised for development and climate action. It’s fair to say that Robin’s mission in Addis was a success!

Check out the declaration here

Previous : Taxing bankers can rebuild our public services
Next : Why we support the Robin Hood Tax