Democrats add a Robin Hood Tax to their platform 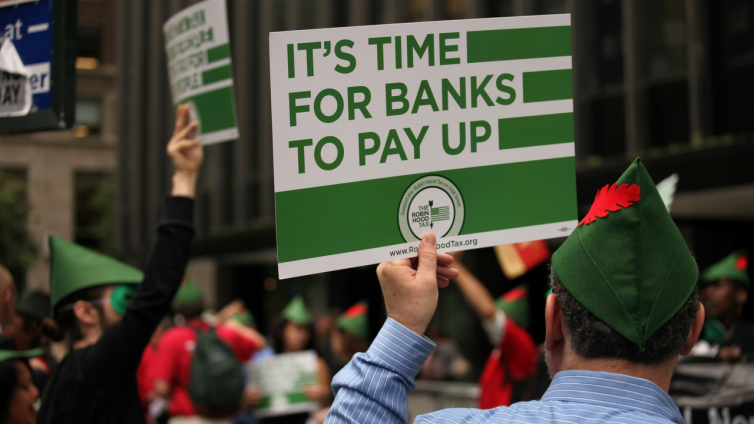 In an election year like the U.S. has never seen before, there’s yet another first. This one is mostly good news. For the first time, a major American political party has included a Financial Transaction Tax (FTT) – aka Robin Hood Tax –  in its party platform.

The Democratic National Committee is now officially on record as calling for a tax on Wall Street speculation.  That’s the good news.  And it’s a testament to the years of grassroots and legislative organizing led the by the U.S. Robin Hood Tax campaign.  Much credit for pushing the Democrats along must also go to the Bernie Sanders campaign.  At countless campaign rallies across the country, Bernie exhorted his supporters to rein in the big banks and tax Wall street to fund the bold programs he was proposing.

The collective effort is paying off.  Our years of organizing, culminating in Bernie carrying the Robin Hood Tax torch on a national stage, has made the very idea of a financial transaction tax… well, normal.

Whereas as recently as two or three years ago, Americans, while supportive of the idea, saw the Robin Hood Tax as something virtually unattainable.  Washington, DC insiders and most members of our congress saw it as “unfeasible.”  Today, the tiny tax on big banks is a part of everyday political discourse.

Much, however, remains to be done.  While we applaud the Democrat’s move to include an FTT in their program, there are issues that give us pause.  First, the party platform is non-binding.  Democratic Party lawmakers are under no obligation to support the FTT when it comes to actual legislation in Congress.  Second, the resolution passed by the Democratic National Committee is silent on a tax rate.  That leaves the door open to watered down proposals that would do little to nothing to rein in the banks.  Lastly, the resolution says nothing about where revenue generated from a financial transaction tax should go.  The U.S. Robin Hood Tax Campaign is committed to FTT revenue going to fund human and environmental need.  A FTT under the Democrat’s resolution could conceivably go to offset other types of taxes being cut.

As we celebrate the forward movement, the U.S. Robin Hood Tax Campaign will continue to organize and keep up the pressure on Democrats in Congress to support a real Robin Hood Tax that generates hundreds of billions per year to address the climate crisis, create jobs and a green energy infrastructure, end HIV/AIDS, expand healthcare and retirement programs, enact free higher public education and the myriad other challenges that plague the U.S.  The legislation to do so already exists.  Bills in the Senate (S. 1371) and the House of representatives (HR 1464) would impose a 0.5% tax on Wall Street speculation and would around 300 Billion USD per year.

The Robin Hood Tax campaign made quite a splash at the Democratic Party convention.  At least one thousand of the delegates inside were wearing the signature green Robin Hood hats.  Outside the hall, demonstrators loudly called for the Robin Hood Tax.  We hope the Democrats are listening.