'Bankers' outside HSBC's AGM with their very own Robin Reliant! 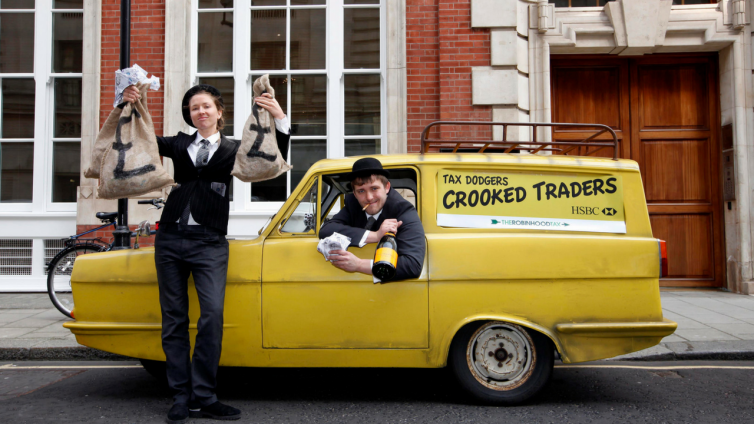 At the end of last week, Robin Hood Tax activists demonstrated outside the Annual General Meetings (AGMs) of two of Britain’s biggest banks: Barclays and HSBC. In both instances, we came with clear messages - an end to dodgy dealings and the demand that they clean up their act - and one clear solution: the Robin Hood Tax.

On Thursday, armed with a sponge and mop, Robin activists descended on London’s Southbank. Setting up outside the Royal Festival Hall, Robin went to work on two ‘bankers’ in our portable bubble-filled bath, scrubbing away to wash the dirt off of them. And it was a massive clean-up job.

What with Barclays setting aside eye-watering amounts in fines (£1.25bn for Foreign Exchange market manipulation, £1.1bn for PPI) and fat-cat pay packets (£5.5m in remuneration for their CEO alone), it’s clear they have a long way to wash away the dirt. We know that a Robin Hood Tax could go a long way getting the banks to clean up their act.

The following day, we rocked up at HSBC’s AGM in a smashing new motor. In recent years, the bank has fiddled markets, ripped-off customers with PPI and helped the wealthy dodge a ludicrous amount of tax, so we thought we’d try and shift some of their shady goods back to them.

After driving up in our Only Fools and Horses Robin Reliant, two ‘bankers’ jumped out to offload the dodgy merchandise. After being turned away from the AGM by the police, we set up shop outside and demanded that HSBC leave their shady practices behind and go legit.

But the change won’t come from the banks alone. We’ve heard their excuses and they won’t wash. With the General Election just over a week away, we need parliamentary candidates to say they’ll stand up to bankers over the next five years. We need real reform of the financial sector in the new Parliament. We need a Robin Hood Tax now!

Previous : Fines and misdemeanours
Next : No More Games!