Dozens of Robins and merry (wo)men descend on Birmingham 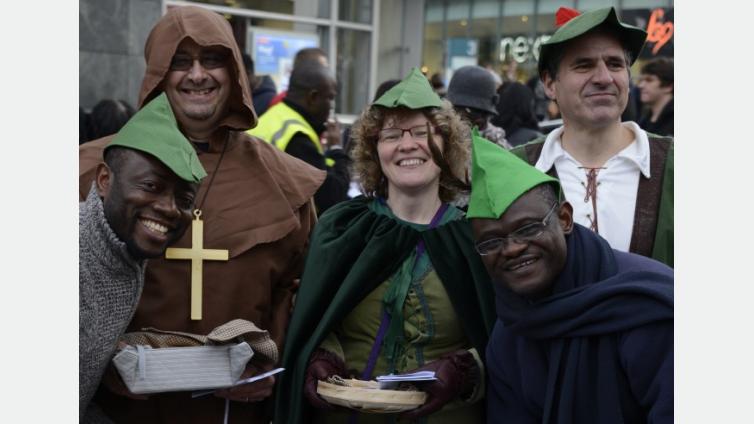 Authored by John Hull, Honorary Professor of Practical Theology in the Queen’s Foundation (a theological college training people for ordained ministry including a social justice programme with involvement in actions for peace and justice) and a long-time Robin Hood Tax supporter (and first-time RHT blogger).

Last Wednesday afternoon, 30 of us (students and staff from the Queen’s Foundation in Birmingham) gathered in the city centre to sing subversive Christmas songs as a fun way of demanding a Robin Hood Tax and encouraging better bank behaviour. Actually, you can read our song sheet at the bottom of this page. With Robin Hood out in front and supported by Friar Tuck, Maid Marion and about a dozen Merry Folk, we made our way through the crowds of Christmas shoppers with our banners.

Arriving at an HSBC branch, we rolled out a large scroll, Robin declared “Here ye! People of England! We demand that the financial sector should pay for the damage they have caused! We demand the introduction of the Robin Hood Tax!”. Passers-by approached us (including a friendly policeman) and wanted to know more about the campaign: we must have handed out over a hundred leaflets!

Whilst all this was going on, Robin Hood, the Friar and Marion went into the bank, distributing chocolate coins to the surprised customers and staff, telling them about the campaign and giving out leaflets while outside we shouted in unison, ‘We want Robin Hood Tax!’.  Staff in the banks often told us that they had never heard of the Robin Hood Tax proposal – some seemed quite taken with the idea.

We take actions of this kind because part of the mission of the church is to expose and transform the unjust structures of society, and we intend to do just that. This was our third annual Robin Hood Tax publicity stunt in Birmingham city centre and we intend to continue.

The Robin Hood Tax Campaign is asking people to get in touch with their council to ask them to support a UK Robin Hood Tax. So far, dozens of councils from all over the country have joined the call to tax the banks and raise money for frontline services and fighting poverty. We’re hoping Birmingham City Council will see the light and bring Robin home soon.

Previous : If 11% pay rises provoke fury, what about a 44% bankers bonus hike?
Next : We demand an inquiry to expose banks' power over Parliament...