Entering the Belly Of The Beast: Robin heads to the HSBC AGM 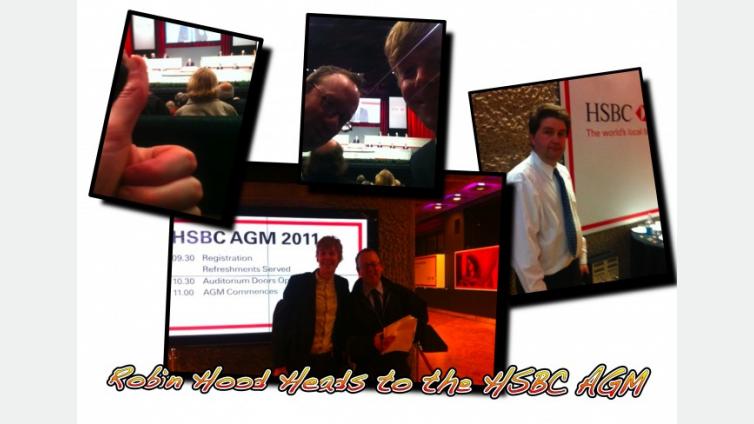 Entering the Belly Of The Beast: Robin heads to the HSBC AGM
Robin Hood
Action
Tweet

This morning we hitched our wagons out of Sherwood and headed behind enemy lines – destination – HSBC annual general meeting. We joined angry shareholders and protesters to ask why HSBC prioritises pay above helping those who were hit hard by its casino banking business model.

Shareholders and general banking staff voiced concerns over lacklustre returns and high pay for the people at the top.  The board was grilled on the size of the gap between wages at the top and bottom of the bank, their role in poorer countries’ economies and bonuses. ‘For the last five years we have been paying you all for failure- how greedy can this board be?' asked one shareholder.

The meeting closed with a vote with a record high of one fifth of investors refusing to back the bank's remuneration plan, stronger opposition over pay than that faced by other banks in the UK. Shareholders were right to rebel and call HSBC's top brass pay levels obscene. If the bank really wants to live up to their often repeated buzz phrase of 'courageous integrity' they should implement a Robin Hood Tax.

Bank AGMs are usually a bit of mystery to all of us – cameras don’t get inside. We tried to change this, and were tweeting throughout: we have reproduced these below. It’s a fascinating picture of what really happens inside closed doors.