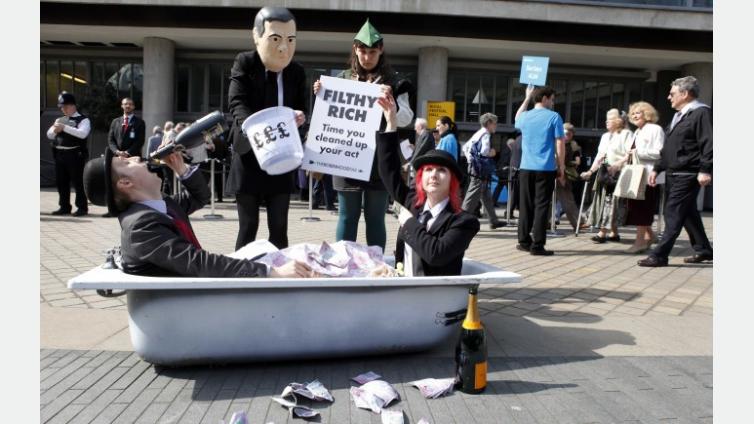 What does a rubber duck have to do with Barclays?

As shareholders gathered for Barclays Annual General meeting they were greeted by a couple of jaunty bankers swigging champagne whilst relaxing in a bath full of money. Why were they there? To highlight the fact that Barclays and the banking sector are still getting ‘filthy rich’ at our expense.

Whilst the UK public is suffering from job losses and cuts to public services, the banks continue to rake in huge profits and hand out obscene bonuses. Last year, if you subtract all the regulatory fines and other restitution payments, the banking sector actually made a whopping 45% increase in core profits. Hardly a sector that can’t pay up.

Barclays in particular continues to court controversy. Recently a review showed that in 2012, despite top line profits of £7bn they paid just £82m in corporation tax.  Then a few days later the head of their investment bank, (aptly named) Rich Ricci, sparked protest when he retired after pocketing £18million just weeks before.

The evidence just keeps stacking up. The banks are completely out of sync with the rest of the country.

On top of all this George Osborne is intent on keeping the money rolling in for bankers when he could do much more for the wider interests of society.

As we can see, little has changed in the banking sector since the crisis. So much more needs to be done to ensure that they clean up their act and pay their fair share towards covering the on going costs of an economic crisis of their making. That's why we want a Robin Hood tax: a small tax on the banks with the power to raise hundreds of billions every year globally to go towards poverty and climate change, at home and abroad.