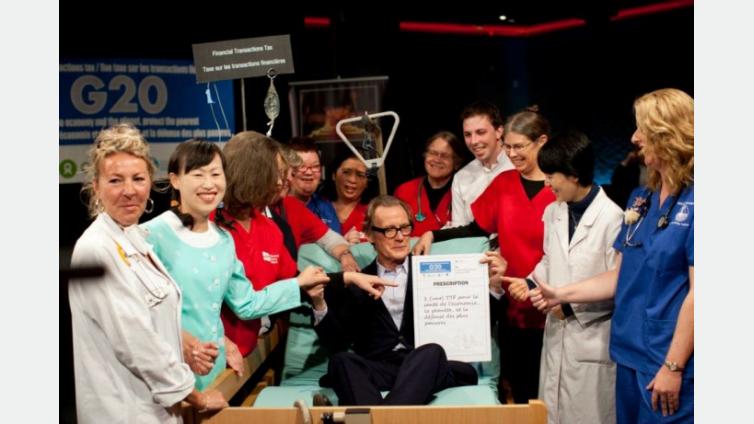 Thanks to the ITUC for this blog.

Support for a financial transactions tax - often called the Robin Hood Tax - to make banks and financial institutions pay back to society is at 63 % according to a new 13- country global poll commissioned by the International Trade Union Confederation.

The FTT enjoys equally strong support in the surveyed G20 countries (63 %) and is even more popular in the six EU countries polled, with 73 % support, 10 points above the global average. Later this week (Friday) EU Finance Ministers will meet to decide on an EU level FTT: now they know European voters want them to go ahead.

In the US, awareness is low, with only 17 % of respondents aware of the FTT as a way for banks to contribute to society, but when it was explained, support reached 63%.

"Four years on from the crisis, global unemployment is climbing to 210 million, incomes are going down and the majority of people can’t save any money. The FTT would put 480 million Euros back into the global economy and curb financial speculation," said Sharan Burrow, General Secretary of the ITUC.

Responding to the results of the ITUC Global Poll, the President of the German Confederation of Trade Unions (DGB) and the International Trade Union Confederation (ITUC) Michael Sommer said in Berlin on Monday that "the time has come now to finally put an end to this period of inaction".

"The poll shows that people have a clear sense of fairness. They rightly denounce the unwillingness of national governments to take action on financial market regulation issues. On behalf of the international labour movement, I call on the heads of state and government to introduce a financial transaction tax.

"When it was a case of imposing savings measures on countries in crisis, cutting interest rates and wages and grinding down workers’ rights, resistance was quickly brushed aside. But since the start of the crisis in 2008, people have been waiting for the instigators of the global economic and financial crisis to be involved in footing the cost of the crisis. A financial transaction tax would make a key contribution to this. It is high time that governments listened to the people rather than lobbyists for the financial sector."

"Now is the time for Wall Street to pay its fair share with a financial transaction tax that would create jobs, rein in speculation, raise hundreds of billions in new revenues and lay the groundwork for long-term economic prosperity," said Richard Trumka, President of the AFL-CIO.

"It’s time for the British Government to get off the fence; instead of acting as a cheerleader for the interests of the city, it’s clear there is over whelming public support around the world for an FTT which will transform public finances and help drive growth and social justice," Brendan Barber, General Secretary of the TUC.

International unions have warned that the democratic contract with voters is broken in many countries after the ITUC global poll revealed alarming trends with 67% of people thinking voters don’t have enough influence on economic decisions.

"Governments must pay heed to their people or we risk increasing political and economic instability. Banks and large corporations hold too much sway over national economies. A financial transactions tax is a good way for international banks to put something back into the global economy," said Sharan Burrow.

Previous : A Just Solution For Sustainable Development
Next : Mark Ruffalo: Why I Support the Robin Hood Tax