Labour announce £2bn tax on largest market in the world!

Shadow Chancellor John McDonnell with David Hillman, Director of Stamp Out Poverty (home of the Robin Hood Tax) at the launch of the Reinforcing Resilience Report 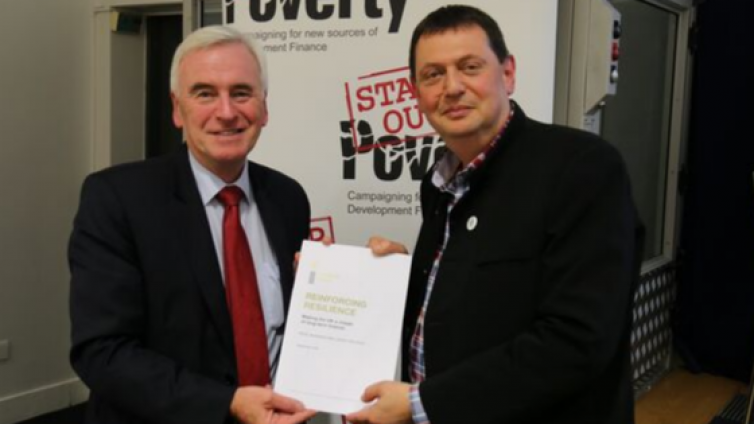 Labour announce £2bn tax on largest market in the world!
Robin Hood
Policy
Politics
Tweet
“All you want to hear from me is whether we endorse the #FTT policy. Let me just say: yes!” - John McDonnell

Music to our ears!

The Labour Party committed to a Robin Hood tax two years ago, but now Shadow Chancellor John McDonnell MP is endorsing the extended cut of the Robin Hood Tax. This will bring in an eye-watering £2 billion a year from currency traders. That's enough to fix the social care crisis and hire 20,000 new teachers and 20,000 new nurses. In one year!

This Robin Reloaded tax will go beyond financial transactions to tax traders based in the United Kingdom who deal in foreign currency.

This is a simple and long-standing idea for raising revenue that is on neither the left nor right of politics. This tax is sensible and timely; a small step towards bringing in sorely needed money to deal with poverty and the climate crisis.

Whilst governments fail to tackle poverty or commit the necessary money to fight climate breakdown, the financial sector trades excessively, making billions of pounds in fees, while doing nothing for the real world economy.

As former banker Professor Avinash Persaud stated, ‘Finance is not an end in itself but a means to an end.’

At the Robin Hood Tax Campaign, we believe finance should be used as a means to stamp out poverty and deal with climate crisis.

This is why we are so delighted a major political party is adopting our recommendations to raise £2 billion a year for people and planet.

1. ...is an extension to the Robin Hood Tax policy on financial transactions that Labour have already adopted.

2. ...is designed to target currency traders (not members of the public buying holiday money!).

3. ...would be applied to all traders based in the United Kingdom to make it difficult to avoid.

4. ...would ensure more responsible financial sector behaviour and a greater link between trading practice and the real economy in goods and services.

5. ...would raise an eye-watering £2 billion every year which could go to fighting poverty and climate crisis.

HELP US GET THE WORD OUT

Previous : Exposing a trillion-dollar lie
Next : Merkel calls for a Robin Hood Tax - will the UK?