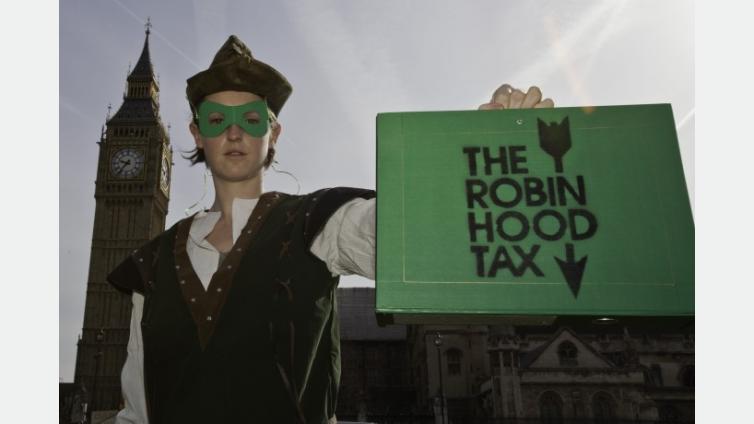 Today, the Robin Hood Tax campaign received another boost as more than 50 financiers came out in support of a tax on financial transactions.

52 former and current financiers have written to David Cameron and other European and world leaders calling on them to back Financial Transaction Taxes (FTTs) to raise revenue for “people in urgent need at home and in the world’s poorest countries”.

The letter, signed by senior figures from Wall Street, the City of London and other financial institutions from across Europe, says that FTTs “will rebalance financial markets away from a short-term trading mentality that has contributed to instability in our financial markets. They also have the potential to raise significant revenue”.

The letter dismisses critics’ claims that FTTs – dubbed a Robin Hood Tax by campaigners who want revenue to be used to fight poverty – would be harmful to the economy, saying they would “have a negligible effect on long-term investment” and that “a modest transaction tax will actually improve the functioning of markets.”

It notes that the value of financial transactions is now seventy times the size of the real economy and that much of this increase is due to computer-driven trading designed to turn very short-term profits that does not contribute to markets’ primary functions: raising investment, allocating resources efficiently and mitigating risk.

The financiers’ intervention comes just days after the launch of the US Robin Hood Tax campaign and on the eve of tomorrow’s European Finance Ministers’ meeting in Luxemburg. The finance ministers’ meeting and next week’s gathering of European Heads of State are expected to break the gridlock caused by UK opposition to an EU-wide FTT. A coalition of willing countries, including Germany, France, Italy and Spain, are expected to press ahead with plans for an FTT which is being blocked at an EU-27 level by the UK.

A recent assessment by the European Commission of the impact of its proposed FTT found that it could have a positive effect on growth.

Their letter says the political momentum behind proposals for FTTs “is an opportunity that should not be missed”. FTTs have a “proven track record” with taxes on particular asset classes in the UK, South Africa, Hong Kong, Switzerland and India currently raising billions of dollars a year, it says.

One of the signatories, John Fullerton, Founder and President, Capital Institute, and former Managing Director, JP Morgan, said: “When managed with a public purpose in mind, securities markets are tools that efficiently facilitate investment in the productive real economy. But much of the market has morphed into a frenzy of destabilising, short-term speculation that at best pollutes the financial system with instability and lost confidence, and at worst creates episodes of outright theft.

“A modest financial transactions tax of less than 1 percent would serve as a remarkably efficient tool to achieve needed reform.”

The financiers join Bill Gates, the Vatican, the Archbishop of Canterbury and more than a thousand economists - including Nobel Prizewinner Joseph Stiglitz - in supporting the Robin Hood Tax campaign.

Previous : The Robin Hood Book - Verse Versus Austerity
Next : Financiers break ranks to back RobinHood Tax