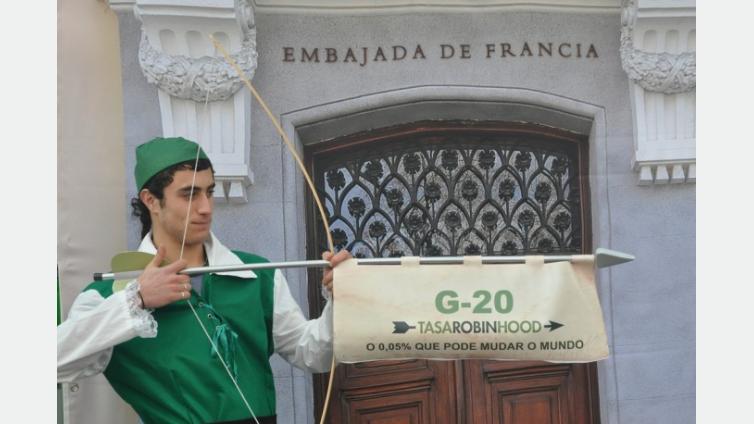 A European tax on financial transactions would be fair, practical and popular and could raise as much as €210 billion (£185bn) to tackle poverty andclimate change, according to a new report by international agency Oxfam.

With Greece apparently on the verge of a second bailout which will benefit its creditors, including big French and German banks, Oxfam says that an EU financial transaction tax (FTT) would ensure banks repay their debt to society. European finance ministers meeting today and heads of state meeting on Thursday (June 23) have a real opportunity to make progress.

Oxfam’s new briefing paper, The Robin Hood Tax: the Time is Now, published today shows that an EU-wide FTT of about 0.05% on bond, share, currency and derivatives would raise €210bn (£185bn) annually.

Austria, Belgium, Finland, France, Germany, Hungary, Luxembourg and Spain are among the countries which already support an FTT. Europe should seize a crucial chance to take a first step now - ahead of November’s G20 summit in France where agreement at a European level, could then be extended to other willing countries.

The EU should first introduce a narrower tax on bond and share transactions. Oxfam calculates this would raise €18bn (£16bn) in France, Germany and Spain alone. The UK already has a tax of 0.5 per cent on shares which raises €4.25bn. A broad-based FTT could raise around £20bn in the UK.

Jeremy Hobbs, Oxfam International Executive Director, said: “This is the biggest opportunity to ease the financial burden on poor countries since debt relief. Europe has a chance to lead the world in making the financial crisis a turning point in the fight against poverty and climate change.

“Hedge funds, banks and other financial institutions enjoy multi-billion pound profits and bonuses – yet we all suffer when things go wrong, particularly the poorest. It is time the financial sector paid its fair share to society.”

The paper presents evidence from a range of respected sources, including the International Monetary Fund, showing that an FTT would fall on the richest in society. The taxes are not only technically feasible but already exist in many countries including the UK and South Korea.

The FTT is backed by Nobel Prize-winning economists Paul Krugman and Joseph Stiglitz and leading financiers such as George Soros and Warren Buffet. Josef Ackerman, Chief of Deutsche Bank has said a regional FTT would be manageable.

Oxfam warned extra revenue is urgently needed to fill a $65bn (£40bn) hole in the budgets of low-income countries caused by falling remittances, foreign investment, export revenues and credit as a result of the economic crisis.

Meanwhile, many European and other rich countries are failing to meet their commitment to spend 0.7 per cent of national income on overseas aid. In Germany, aid spending is less than the wages and bonuses of Deutsche Bank.

A YouGov poll for Oxfam found that more than 80 per cent of voters in Germany, France, UK, Spain, the Netherlands and Italy believe that banks have a responsibility to clear up the mess of the economic crisis they caused.

Campaigners in about 40 countries worldwide with this week take part in a global day of action to show their support for the Robin Hood Tax.

Previous : This week: time for Robin Hood Tax? Actions happening in forty countries
Next : Could Robin be the Solution to Climate Finance?