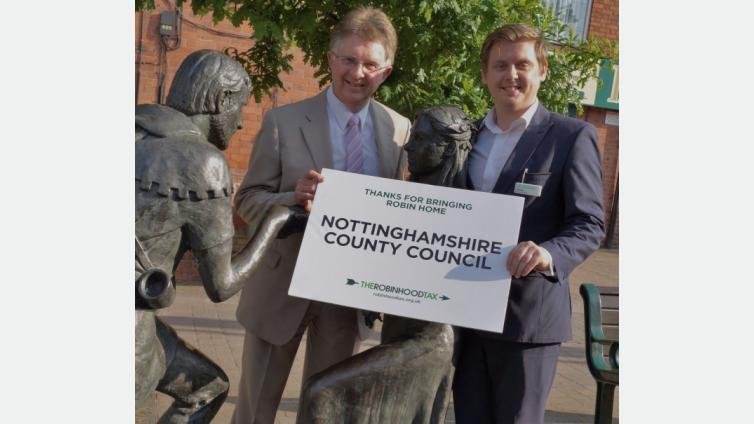 Last week saw a new council joined the growing ranks of local government officials calling for a UK Robin Hood Tax, and we were very excited by the news! Nottinghamshire holds a special place in the campaign’s heart, not only as our first county council, but also in being the spiritual home of the legend of Robin Hood: bringing a new meaning to Bring Robin Home.

The motion spoke of the ‘suffering forced upon local residents as a result of the Coalition government’s cuts programme and the impact upon the NHS and Local Government’. It was moved by Cllr Ian Campbell (Lab) and seconded by the Leader of Nottinghamshire Council, Cllr Alan Rhodes (Lab).

'The financial sector needs to take some responsibility for the economic challenges this country is facing…by introducing this tax, they can reduce the damage they have caused to our public services’, argued Councillor Ian Campbell.

And there is an even great need for additional revenue in Nottinghamshire. Nottingham is the poorest city in the UK and has an average household income of just £10,834 a year – compared with £16,034 for the rest of the country. Residents in the county’s poorer areas are already struggling to make ends meet – with swingeing cuts in services, this gap will only widen. In spite of this, the county is facing another huge reduction in its budget from central government.

Councillor Alan Rhodes said ‘We are calling for the Coalition Government to act now. The Robin Hood Tax could generate funding for vital services in Nottinghamshire, including care for the elderly, our schools, our hospitals and even our libraries.

Nottinghamshire Labour have brought Robin Hood back home, where he belongs.

Needless to say, we were delighted to be welcomed back.