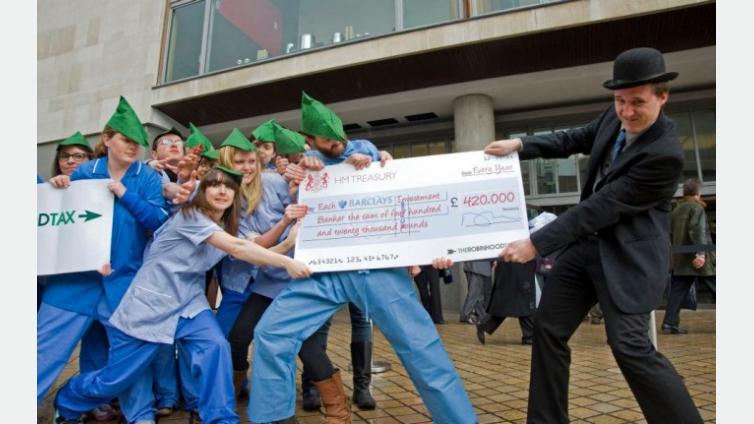 Today was Barclays Annual General Meeting, and a merry band of Robin Hood Tax supporters were there to mark the occasion with a good old tug-of-war.

The decisions made inside these meetings - like the size of CEO Bob Diamond's obscene pay package - don’t just affect shareholders. As taxpayers, we’re all getting a raw deal. Not least because one the reasons these huge payments are possible is due to an implict subsidy from the Government.

This subsidy, first identified by the Bank of England, comes about because banks are able to borrow money more cheaply as creditors know they will be bailed out by the taxpayer if they get into financial trouble. This 'Too Big to Fail' subsidy was worth £46 billion last year.

New research from the Robin Hood Tax campaign shows that each Barclays investment banker received an implicit subsidy of £420,000 from the Government last year. That’s enough to pay 17 nurses to work for a year.

David Hillman from Robin Hood Tax said: “It cannot be right that while nurses and teachers fear for their jobs, the Government continues to underwrite bankers’ salaries. Money raised by a Robin Hood Tax could go a long way towards boosting the economy, protecting public services and helping poor people at home and abroad."

The bank AGMs used to be more low key affairs, contented stockholders behind closed dooors. As anger at the banks and their pay packets continue these AGMs have become key dates in the news cycle. Knowing the press would be there, we took advantage of the opportunity to put our message across.  This was not just any old tug-of-war, and the nurses and banker struggling over the Treasury’s giant cheque caught the eye of much of the media.

You can catch coverage of our trip to the AGM on BBC News, Sky News and in the Telegraph, the Independent and the Guardian.

Previous : Thumbs down for bankers: Robin in Scotland
Next : Top Catholic urges Cameron to support a Robin Hood Tax