Osborne's FTT legal challenges has been thrown out by European Court 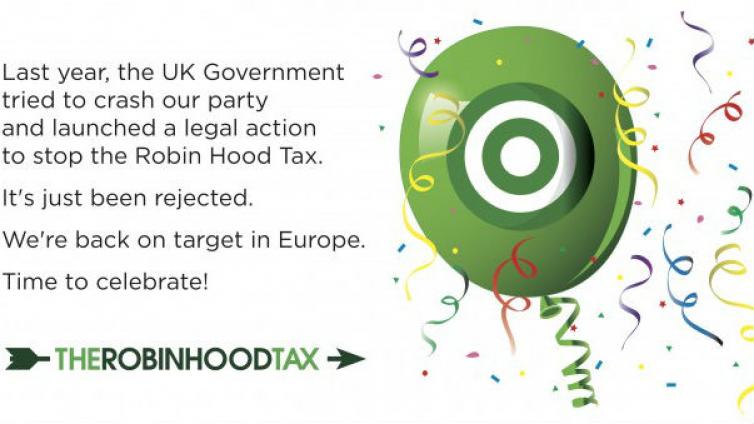 Last spring, in response to the progress being made with the European Robin Hood Tax, our Chancellor thought it best to launch a legal action against it – hoping to kill off the most popular tax in history.

Yesterday the European Court of Justice (ECJ) rejected his challenge, dismissing it as ‘premature’.

But then, if this action was premature, then he was always going to lose…

So it rather begs the question: why did the Chancellor use taxpayer money to launch an action that was doomed to fail?

Despite, Osborne’s claims that he was intervening on behalf of the British people, it was clear whose interests he was acting in; after all, the Chancellor has form in sticking up for his friends in the City. Having already launched a legal action against the bonus cap, with this challenge he proved once again that he was going to Europe to bat for the bankers. Though this time he’s been bowled first ball.

Last summer, over 16,500 of you called on the Chancellor to stop being a party pooper and drop his challenge – so many that the Treasury had to block the emails! But he went ahead with the legal challenge anyway. Now one of Europe’s highest courts has shot it down.

But that’s not the end of it…

It has been revealed that not only must the British public pay for Osborne’s fruitless challenge, but also for the legal costs of the European Commission (who were defending the Robin Hood Tax).

That’s right: Osborne’s empty gesture to appease his City paymasters will cost us even more!

And as an obstacle designed to slow the progress of the Robin Hood Tax it has spectacularly failed.

With UK opposition neutralised, we are confident that an important announcement from the 11 countries backing the tax will be made as early as next week.

Although the legal challenge may have been defeated, we still need to make it the Robin Hood Tax we've been fighting for. Sign here and join the 700,000 people calling for a strong tax to protect public services and fight poverty and climate change.