Robin at the Bankers' Banquet 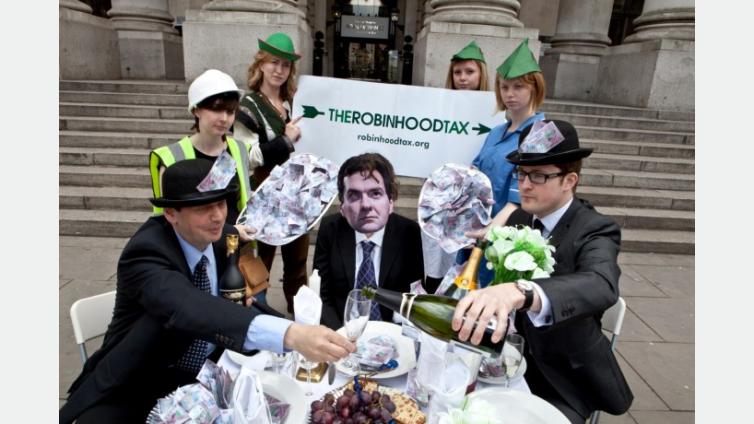 Ahead of the annual Mansion House Bankers' Banquet, campaigners headed to the Royal Exchange in the City of London yesterday to demand a Robin Hood Tax on the financial sector.

Dressed as bankers and Chancellor George Osborne, they sat down to a sumptuous dinner and quaffed champagne while being served platters of cash by public sector workers.

While millions of people face job losses, public service cuts and pay freezes, bankers continue to line their own pockets despite an economic crisis they helped to create.

A survey for Astbury Martin published in November showed the pay of senior City bankers increased by 21 per cent over the previous year. Investment banks continue to pay out billions in bonuses to staff. That is only possible thanks to taxpayers’ bailouts and support. The Bank of England has found that taxpayers indirectly subsidise ‘too big to fail’ banks to the tune of tens of billions every year.

Katy Wright, spokesperson for the Robin Hood Tax Campaign, said: “While City bigwigs tuck into dinner, the rest of us are finding it hard to stomach the fact the financial sector has still not paid to repair the damage it caused.

“Even the IMF says banks are under-taxed but the Chancellor is ready to ask Grannies to stump up more rather than ask them to pay their fair share.”

Previous : Can Robin help us weather this storm?
Next : A Just Solution For Sustainable Development