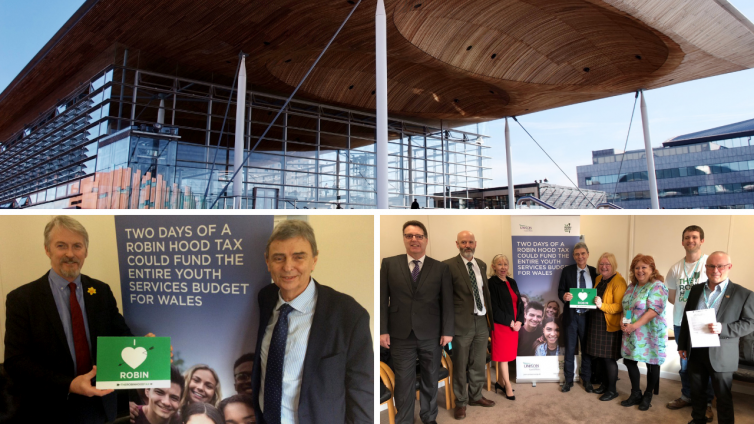 “It’s just makes so much sense!” - that was the response from one Assembly Member when they saw our sign detailing how two days of a Robin Hood Tax could fund the entire youth services budget for Wales.

Last week, Robin went on the road, this time to Cardiff to meet with politicians at the Senedd (the Welsh Assembly). We wanted to hear from Assembly Members about how austerity has affected their communities, and to talk to them about how a Robin Hood Tax could help reverse the cuts.

They told us how Wales and its communities had been hit hard since the financial crisis. Over the last nine years, library budgets have been cut by a third, one in ten police officers have lost their jobs and more than 100 youth centres have been closed down.

Working with UNISON - a member of the Robin Hood Tax coalition - we’ve been pushing hard to get councils across Wales to back our Bring Robin Home campaign. But this time, we want to go further: we’re pushing to get national assemblies on board as well.

And for our first event, we were delighted with the turn-out! A quarter of all Assembly Members came to our lobby, where we were also joined by UNISON General Secretary Dave Prentis (a long-time Robin supporter). All of those who came told us that they were in support of the campaign - now we want to get that on the record. We're going to be pushing for the Welsh Assembly to publicly back Robin!

And it won't just be in Wales - we’re going to continue to push politicians across the country to adopt the world's most popular tax. But we'll need your help to do it.