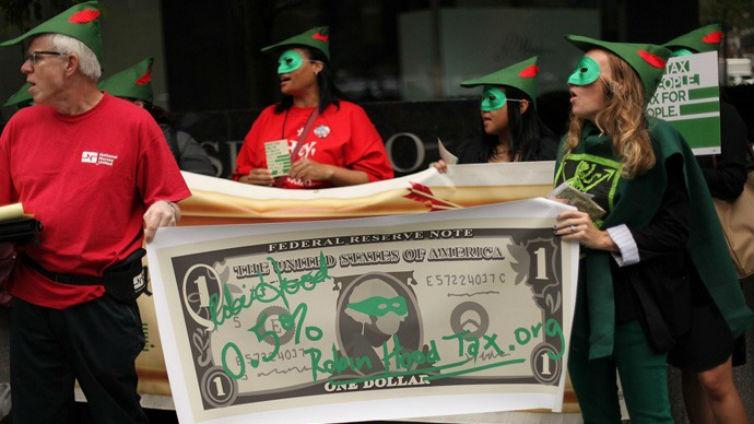 Semeta has been leading the progress in Europe where 11 countries (including some of the biggest economies Germany, France, Italy & Spain) are now set to implement the tax in 2014 which will raise a massive €35 billion a year!

His trip was designed to promote the Financial Transaction Tax (FTT) in the U.S. and encourage the UK to join the European initiative.

What was the best part? In his speech, he explained that FTT revenue should go towards tackling poverty and climate change:

"The Commission has always been supportive of an international approach to the Financial Transaction Tax. It offers an attractive funding solution for our global challenges such as development and climate change.

We have actively pushed for this in the international arena and will continue to do so."

Owen Tudor (Head of European Union and International Relations at the TUC), long-time friend of the RHT campaign, was at the event in Washington and reports back:

I’m back from a 48-hour round trip to Washington DC with Shadow Financial Secretary to the Treasury Chris Leslie MP, and it was really interesting to see exactly the same debates about a Robin Hood Tax being had in the USA as we’ve had in the UK. EU Tax Commissioner Algirdas Semeta spent longer in the US, making the case for the 11-country EU financial transactions tax in New York as well as Washington, and he was on fine form at the public seminar we set up with friends at the Center for American Progress and the Friedrich Ebert Stiftung.

The two visits were designed to promote the EU transactions tax in the US, and inch both the US legislature and executive, and the UK, towards joining the EU’s initiative, so it’s good news that this week, Senator Harkin and Rep deFazio are re-introducing their “Wall Street Trading Tax” in Congress. Their letter to other members of Congress seeking support for the tax quotes Nobel prize winning economist Paul Krugman and AFLCIO President Richard Trumka, but also former Chair of the Federal Deposit Insurance Corporation Sheila Bair and John Bogle, the founder of Vanguard, a huge mutual fund company.

Signs of support for an FTT are growing – the H-street based Center for American Progress itself, very close to the Obama White House in more than just geographical sense, has never been so forthright in support. Commissioner Semeta said that when he had been in New York, UN Secretary General Ban Ki-Moon had expressed his support for the tax, and Wall Street bankers had been interested more in the rate than opposing the principle of the tax.

Chris Leslie’s presence was designed to open up a dialogue between the Labour Party and Democrats about how to co-ordinate their work on the issue, to deal with concerns about tax competition between Wall Street and the City of London, although such competition is more apparent than real, given the possibility of designing FTTs to prevent avoidance by moving jurisdiction. There will be more transatlantic discussion as a result of his visit.

Chris Leslie recorded this interview after the seminar at which he spoke, and said:

“I don’t see any evidence that there would be a negative effect on economic growth. In fact, quite the opposite. I think if you did have a global financial transactions tax where all of the global financial centers were involved and it was also set at a rate that is pretty modest, it wasn’t going to have a distorting negative consequence, then you could raise revenues that would actually help promote growth and invest in job creation. And I think ultimately that’s one of the main arguments in favour of a financial transactions tax.”

Campaigners in the US were really pleased about the visits, and will be building on the progress made with the administration – which has a new Treasury Secretary, yet to go on record about an FTT – and with Congress, where even moderate Republicans are beginning to wonder where the money to keep the government going can be found…