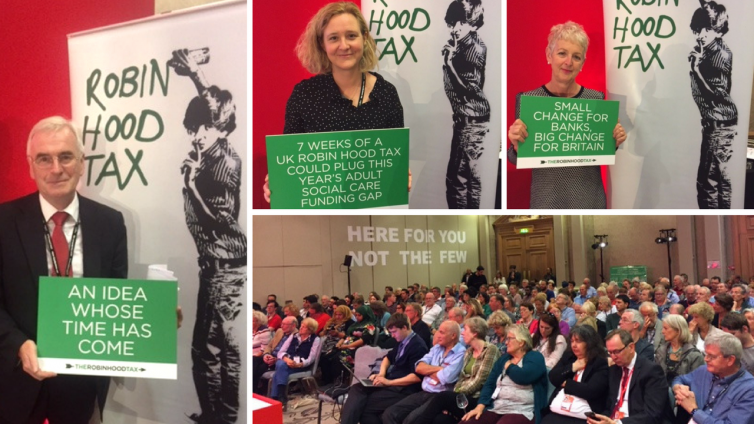 After 7 years of public service cuts, voters are looking for alternatives to austerity. Step forward, Robin! The Labour Party’s backing of a Robin Hood Tax for the first time at this year’s general election represented a sea change in the progress of our campaign. And we were looking forward to discussing it at our fringe meeting at their annual conference in Brighton this week.

Beforehand, we crowdsourced questions from our supporters to submit to our panel (which included Shadow Chancellor John McDonnell), and received dozens of excellent suggestions. As delegates arrived at the venue on Monday, we asked them how they would spending the billions a Robin Hood Tax could raise.

With a packed-out venue (only standing-room at the back) and hundreds watching the Facebook Livestream from home, we knew the Robin Hood Tax had struck a popular chord with Labour members and the public alike - a point addressed by our chair Gail Cartmail.

Our very own director David Hillman agreed, referring to a poll we commissioned that found (among other things) that 2/3rds of Labour voters believed that the UK financial sector had not contributed enough to the wider economy. Clearly, not enough has been done to make sure banks pay to clean up the mess they made of the economy.

It’s adoption by the a major UK political party proves that not only is the Robin Hood Tax a popular policy, but also that it’s now a mainstream idea, as echoed by its support in Germany, France and the US Democrat Party.

Shadow Chancellor John McDonnell reiterated his party’s commitment to the tax and said that he would seek to work with other international partners (including France and Germany) to promote the idea, if Labour formed the new government. He also told us that the Robin Hood Tax would be a top priority in the first Finance Bill of a future Labour government.

Through stirring interventions from the floor and some powerful testimonies recounted by our panellist Ros Wynne-Jones (Daily Mirror), it became clear that there was a great need for more money to help those just getting by. This point was repeated by Alfie Stirling (an economist from think tank ippr), when he outlined how the economy was failing to work for everyone, and what could be done (as well as a Robin Hood Tax) to improve the situation.

Finally, CLASS: Centre for Labour and Social Studies director Faiza Shaheen spoke passionately about the need for everyone to make a compelling case for an end to austerity and for greater investment in our communities.

As people filed out at the end of the session, we were delighted with the positive reception. Robin has made it into the mainstream!

To watch our livestream of the event

Previous : Ten Years Since the Run on the Rock
Next : The Robin Hood Tax in Illinois: Organising for a LaSalle Street Tax