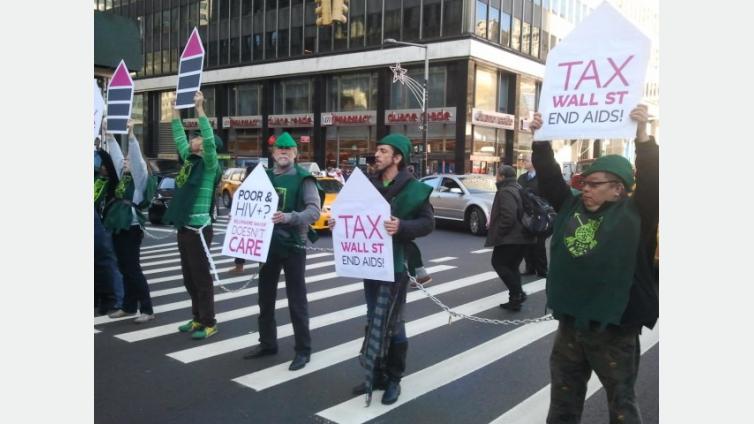 This piece is part of a series of blogs by leading NGOs to call attention to a range of issues that should be raised at the G8 summit at Camp David in rural Maryland from May 18-19.

What do Desmond Tutu, Bill Gates, the new President of France, Al Gore and the Vatican all have in common? It's a brilliant and simple idea that has something to do with green tights and Sherwood Forest. Along with millions of merry men and women around the world, they are all supporters of the campaign for a Robin Hood Tax.

What started as a neat little idea from American Nobel-prize winning economist James Tobin in the 1970s has now grown into a global movement with the support of more than a thousand economists. A host of European countries hope to implement a version this year. So what's all the fuss about?

The proposal is for a tiny tax of less than half of 1 percent to be applied to financial transactions. We're not talking you taking money out of ATMs, or paying for goods and services. This is about the casino-style speculation on the trading floors of Wall Street -- high frequency transactions carried out by computer algorithms, billion dollar bets on currency price fluctuations, credit default swaps and other derivatives.

Because these markets have grown so big -- the global derivative market alone is now a mind-bending seventy times larger than the entire economic output of the planet -- the tax is capable of raising hundreds of billions of dollars a year. A Robin Hood Tax has the potential to help solve our crippling revenue crisis, providing much needed money to tackle poverty and climate change at home and abroad.

That is why millions of people around the world are in support: we could repair our crumbling infrastructure, put people back to work and jumpstart the economy. We could repair our badly frayed social safety net, providing support for low-income families, affordable housing and health care! We could get our local governments back on their feet, keeping and hiring back nurses and teachers!

The U.S. Government spent $2,500,000,000,000 of public money to bail out the banks four years ago when Wall Street sparked the largest financial crisis of a generation.

People's sense of fairness has been stretched to the limits by the continued spectacle of huge bonuses and eye-watering profits for financiers, while those least responsible for the crisis are paying the highest price.

Stories of job losses, foreclosures and young people left without a future abound. The National Center on Family Homelessness estimates that in the three years following the financial crisis, the number of children living on the streets, in shelters, motels or doubled-up with other familiesjumped 38 percent to 1.6 million.

Worse yet, the effects of the gambling on trading floors of Wall Street rippled out far beyond the American shores. The world's poorest countries are facing a $65 billion hole in their budgets because of the financial crisis, according to Oxfam. And that means children missing out on school, people living with AIDS going without medicine, roads unbuilt and more hungry people.

This has been compounded by rich countries wavering over their aid commitments and reneging on a $100 billion climate change adaptation fund at a time when it's needed most.

Financial transaction taxes are proven revenue raisers. There is a tiny tax of just 0.0018 percent on securities right here in the U.S. that helps fund the Securities and Exchange Commission. The UK collects billions each year from a 0.5 percent tax on shares. Economists estimate that a similar tax applied at appropriate rates here in the U.S. across all asset classes would raise hundreds of billions of dollars each year.

That's why Bill Gates backed the tax at last year's G20 Summit -- calling for money to be used to tackle poverty and climate change. That's why if you are walking down the streets of Chicago this week you'll see 3,000 nurses marching in Robin Hood hats and making the same case. There will be merry men and women in Washington, Rwanda, Britain, Korea, Japan, Belgium, Malawi, Germany and around the world -- a mass action designed to put pressure on the G8 leaders as they meet in Camp David to back a Robin Hood Tax.

There will be Robin Hoods inside Camp David as well: France's new President, Francois Hollande, and Germany's Angela Merkel are leading the fight for a financial transaction tax to fund the fight against poverty and climate change. Italy's premier Mario Monti even studied under James Tobin.

We also have vociferous opponents, none more so than the financial sector itself and the politicians who rely on Wall Street's donations. But a critical mass is building behind a tax that could generate billions in much needed revenue while curbing the worst excesses of casino banking. It may be a small and simple idea, but it could make a big difference to the U.S. and the world.

Liz Ryan Murray is spokesperson for the US Robin Hood Tax Campaign.