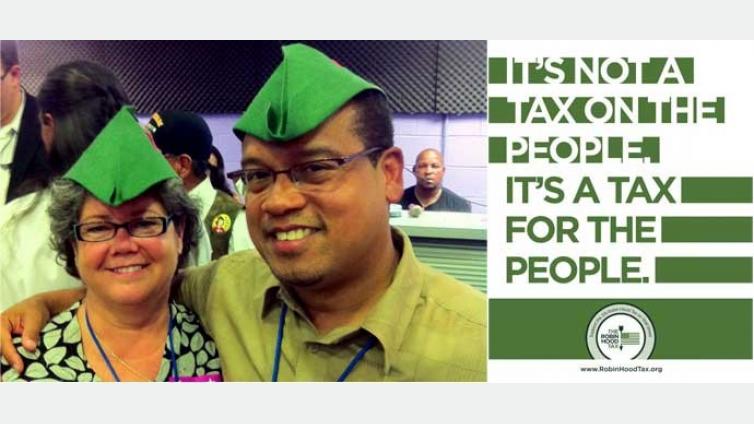 This blog is from the The Robin Hood Tax US

Yesterday in New York, the U.S. Robin Hood Tax Campaign applauded the introduction in Congress of a bill that would impose a tax on Wall Street speculation.  Introduced by Rep. Keith Ellison, HR 6411, the Inclusive Prosperity Act,  would raise up to $350 billion in annual revenues that would be used to breathe new life into Main Street communities across America, as well as international health, sustainable prosperity and environmental programs.

The legislation embodies the Robin Hood Tax, a 0.5% tax on the trading of stocks, 50 cents on every $100 of trades, and lesser rates on trading in bonds, derivatives and currencies.  It marks the return of a sales tax on financial transactions in place from 1914 to 1966 and targets the high-risk, high-speed trading that dominates the markets.

“The American public provided hundreds of billions to bailout Wall Street during the global fiscal crisis yet bore the brunt of the crisis with lost jobs and reduced household wealth,” said Rep. Ellison in a press statement.  “This is a phenomenally wealthy nation, yet our tax and regulatory system allowed the financial titans to amass great riches while impoverishing the systems that enable inclusive prosperity. A financial transaction tax protects our financial markets from speculation and provides the revenue needed to invest in the education, health and communities of the American people.”

The legislation’s goal is to raise meaningful tax revenue dedicated to low and moderate income families by strengthening the social safety net and by expanding investments to protect health, rebuilding infrastructure and creating good paying jobs.  The tax is also to target international needs, including AIDS treatment, research and prevention and for other critical assistance.

“Congressman Ellison is showing great leadership for our country,” said Jean Ross, RN, co-president of National Nurses United. “HR 6411 is a critical step to generate the revenue for the healing and recovery our Main Street communities across the nation so desperately need.  From coast to coast, nurses, health care, AIDS, environmental, labor, faith community and other community activists have come together calling for a Robin Hood tax on financial speculation so that Wall Street will help pay to reverse the damage its reckless behavior caused to our economy. This is a small, common sense tax, already in place and working wonderfully well in dozens of countries across the world. America is ready for the Robin Hood tax.”

“Last summer, scientists proved that we can actually end the AIDS pandemic if we just scale up our investment in treatment and prevention programs,” said Jennifer Flynn, managing director of Health GAP (Global Access Project). “But when we go to Congress, all we hear about are budget cuts.  We need to increase revenue and the Robin Hood Tax is the best of all proposals to do just that.”

“This tiny tax on Wall Street will make our economy more stable and more fair.  The U.S. once had a Robin Hood Tax and we were better off for it, it’s time to bring it back,” said Liz Ryan Murray, policy director for National People's Action.

“In its essentials, the idea of a financial market transaction tax is simple,” said economist Robert Pollin, co-director, Political Economy Research Institute (PERI), University of Massachusetts-Amherst.  “It would mean that financial market traders would pay a small fee to the government every time they purchased any financial market instrument, including all stock, bond, options, futures, and swap trades.  This would be the equivalent of sales taxes that Americans have long paid every time they buy an automobile, shirt, baseball glove, airline ticket, or pack of chewing gum, eat at a restaurant, or have their hair cut.”

The Robin Hood Tax also helps to control the volume of speculation engulfing the financial markets, where risky bets are causing instability and sidelining billions in funds that might otherwise be directed to a productive economy.  And the sales tax assists in curtailing speculation in food and fuel markets, where bets on these essentials are causing spikes in prices and serious shortages.

The introduction of HR 6411 came on the eve of the One Year Anniversary of Occupy Wall Street.  Occupy’s call to stop the policies of inequality of the 1% continues to resonate across this country and beyond. Yesterday Robin Hood Tax campaigners joined Occupy activists at a labor solidarity event at Zuccotti Park in New York City, and then carried the message  to offices of financial institutions to demand imposition of the Robin Hood Tax.

Previous : Ideas for a Fairer Economy
Next : A Difficult Labour