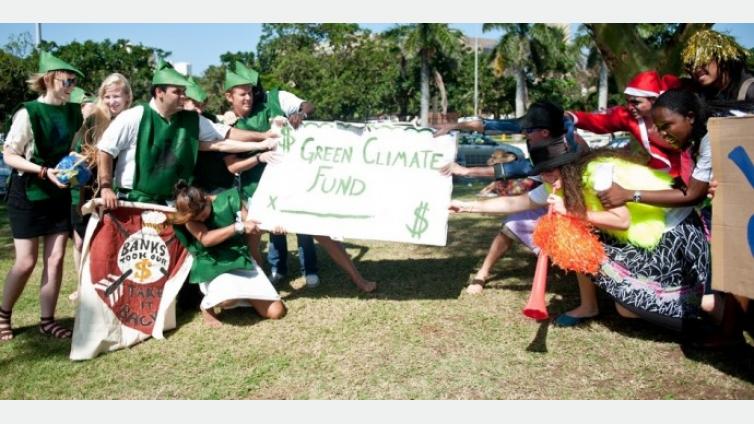 Right now, at the Global Climate Change Conference in Warsaw, Poland, global decision-makers are holding discussions on the future of the response to climate change, and how to fund it.

Climate change is profoundly an issue of injustice, both intergenerationally and internationally. It is young generations and communities in the poorest countries who are least responsible for causing climate change who are feeling its impacts most harshly.

These impacts will just get worse as the leaders of rich countries continue to falter on their commitments to take responsible climate action.

To achieve a meaningful global climate deal in 2015, we need to get fair and adequate climate finance moving from developed countries to poorer nations now.

Developed countries have already accepted their responsibility to help fund low-carbon development and adaptation measures in poorer countries, making the commitment in 2010 to provide $100billion each year by 2020.

But the fund remains empty, and certain developed countries seem intent on shirking their responsibility by re-packaging existing forms of aid, like Official Development Assistance, as ‘climate finance’.

There is no ‘way out’ for developing countries that are most vulnerable to climate change from the need to raise standards of living for their people, adapt to climate impacts and contribute to global efforts to reduce greenhouse gas emissions. So we can’t stand for rich nations trying to find a ‘way out’ of their commitments.

Young people at the UN climate talks have been supporting the Robin Hood Tax for years. We recognise their potential to make a significant contribution of new and additional money to the finance pledges made by rich countries.

Additionally, away from the UN halls we recognise that in the UK the campaign for the Robin Hood Tax can play an important role empowering more people - particularly youth - to engage with debates on what role finance should play in our society, and help shape a reinvention of the financial sector.

We need to untangle the web of power between fossil fuel corporations, the finance sector and government that means our decision makers and financial markets have an unhealthy interest in maintaining our highly-polluting ways of running the economy. We need to reclaim the argument that we can’t afford not to take action on climate change, not letting those who claim that ‘green’ policies (i.e. those that go beyond a short-term self-interested worldview) are too expensive speak for our society.

The Robin Hood Tax throws this argument back at the financial sector, demonstrating how a tiny tax on their transactions can generate enough revenue to fund significant action on climate change and poverty reduction, at home and abroad.

It’s a way of ensuring more responsible behaviour from the City, telling them: if you’re part of our society, then you have to be part of solutions to challenges that we’re all facing.

Young people have been particularly affected by the reckless casino capitalism of the financial sector, suffering mass unemployment in the economic recession triggered by the financial crash. We’ll also be massively affected by climate change - which is why we’re committed to promoting solutions, and getting our voices heard.

To combat climate change in a meaningful way, we need more democratic and more sustainable societies, that listen to the youth voices calling for equitable, effective solutions. The problems caused by climate change and the financial sector are already impacting on our lives - but the Robin Hood Tax offers a way to make the financial sector work towards, not against, a clean fair future.

Previous : Don't Believe the Hype - The Robin Hood Tax Is Alive and Kicking
Next : Inside the square mile, greed is still good. Outside, we won't tolerate it.