The Robin Hood Tax in Illinois: Organising for a LaSalle Street Tax 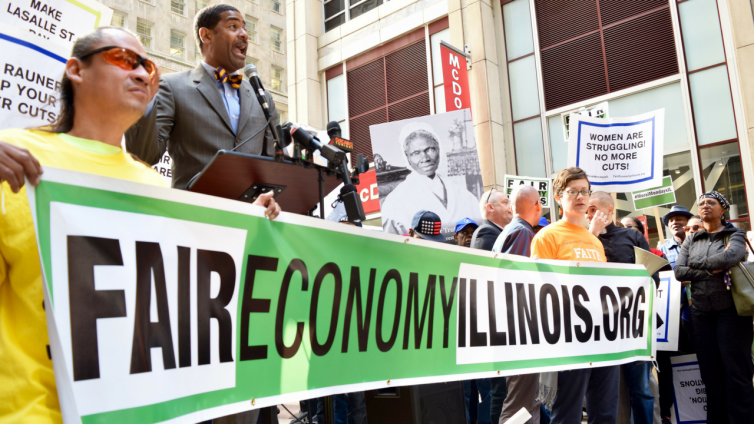 Notes on the author

Bill Barclay is an organiser within the LaSalle Street Tax Coalition and Democratic Socialists of America.

The United States has not been a promising venue for enacting a financial transaction tax (Robin Hood Tax, FTT) at the national level.  However, state legislatures (i.e. local, legal assemblies) in the U.S. have considerable power to levy taxes at the state level.  Two states in the U.S., New York and Illinois, are home to the largest financial markets in the country and among the largest ones in the world.  While New York may be better known because of the New York Stock Exchange, Illinois has two of the world’s largest derivatives markets: the Chicago Mercantile Exchange (CME), and Chicago Board Options Exchange (CBOE).

Faced with continued opposition from the Obama administration to an FTT, several organisations began thinking about the possibility of taxing derivatives trading on the stock exchanges.  The key groups in this effort have been National Nurses United (NNU), Chicago Teachers Union (CTU) and Democratic Socialists of America (DSA).  In addition, several community groups were also involved in creating the LaSalle Street Tax Coalition (LSTC; LaSalle Street is the Chicago version of New York City's Wall Street).  The LSTC’s goal is the introduction of a tax – the LaSalle Street Tax – on the trading at the Chicago exchanges.

Over the past 5 years, the LSTC’s approach has been a combination of education, agitation, and legislation.  We have engaged in street actions, done door-to-door canvassing, and organized meetings between Illinois state lawmakers and their constituents.

We began with a focus on education, holding public meetings in several legislative districts and community centers.  Our initial tasks were (i) to briefly and clearly explain to our audiences what derivatives trading is, (ii) to untangle the reason for a tax on this activity, and (iii) to publicise the amount of revenue that could be raised by even a very small levy on the trading.

During this phase of our work we adopted the name “LaSalle Street Tax” as a way to focus attention on the who, where, and what of trading in Illinois.  One of our community organisation members placed the idea of a LaSalle Street Tax on the ballot in several Chicago precincts during a local election.  The vote was only advisory and only took place in a small part of the city.   But it succeeded with over 75% of the vote in those precincts.

We have spoken on the LST at the many rallies and marches that focused on the serious financial problems of Illinois and Chicago.  The state income tax is low and flat, so, when coupled with the sales tax, Illinois tax system is among the most regressive in the U. S, hitting the poorest in the state hardest.  At the same time, pensions in the public sector have been under attack by lawmakers from both state-wide parties, Republicans and Democrats. Health, education and social welfare programs have been cut repeatedly as the state struggled with the impact of the 2008 financial crisis and the Great Recession that followed it.  Our most aggressive street action was a blockade of the door ways to one of the trading floors.

In 2017, for the first time, we achieved sponsorship of a LST bill in the Illinois senate, the upper chamber of the state assembly.  Our legislative work is now focused on getting other members of the Senate to sign on, enough so that the bill is not sent to the Rules Committee where party leaders send legislation they do not want to vote on.  We’ve come a long way in the past few years, but we still have a long way to go.  And we, like our opponents from the financial sector, fully understand that a breakthrough at the Illinois state level would dramatically change the politics of an FTT at the national – and maybe even international – level, even in the Trump era.

Previous : Robin Hood at Labour Conference
Next : A Tour In The Heart Of The City