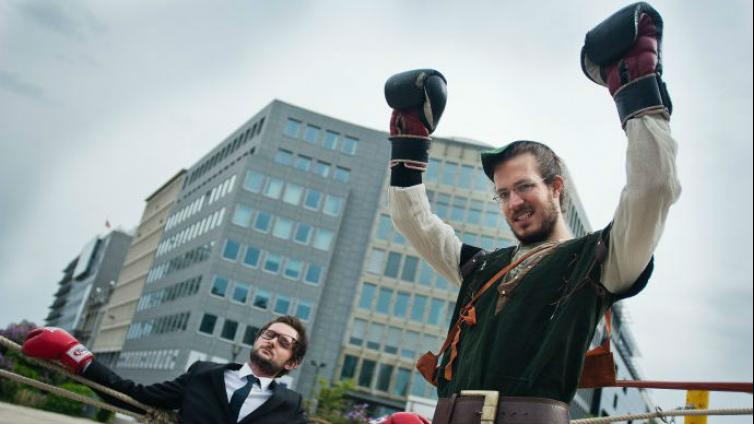 Today a group of European finance ministers reaffirmed their commitment to a Robin Hood Tax, announcing that - as a first step - they will seek to introduce the tax on a variety of financial transactions over the next 18 months.

This is real progress – those ministers that have backed the tax have listened to the 700,000 people calling for the tax.

In the yellow corner, were a gaggle of bankers crying for their bloated bonuses and for ‘profits over people’. Meanwhile - chanting for Robin - stood a group who would benefit most from a strong tax that goes to the right places: a nurse and a teacher calling for Robin to protect public services and a polar bear urging him to fight for a sustainable planet.

Overseeing the bout were our activists wearing German Chancellor Angela Merkel and French President Francois Hollande heads, who stood as today’s referees. And they weren’t the only big names watching the fight: EU Tax Commissioner Algirdas Semeta - and a supporter of the Robin Hood Tax - mentioned the action when inside the ministers meeting this morning, arguing that it reflected the will of ‘the wide majority of whom are in favour'.

After a few rounds, our champion in Lincoln green stood victorious! But when trying to collect his prize-winnings from the refs, the money was held just out of reach. The fight’s not over...

We may have got the first stage of a financial transaction tax, but we have yet to see it become a full Robin Hood Tax. Getting it in place is the start of the process; now we need to make it stronger and fight for where it gets spent.

Robin’s just getting warmed up!

Here's our photo gallery of today's action. Join the 700,000 calling for a strong Robin Hood Tax that goes to the right places here.