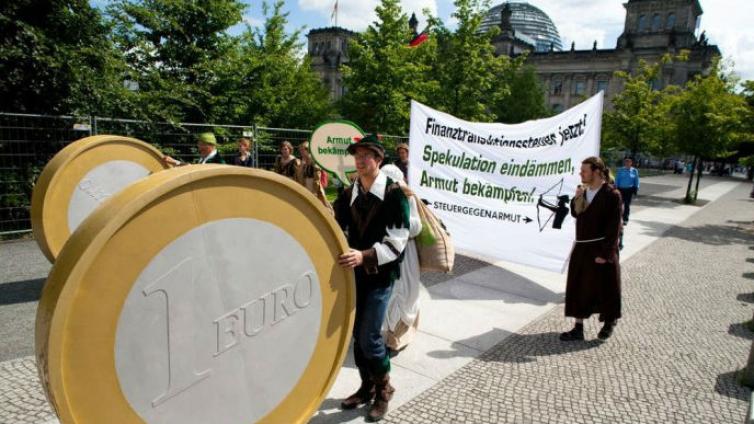 It’s been quite a week for the opponents of the EU Financial Transactions Tax (FTT). In yet another – increasingly desperate – attempt to pronounce the death of the proposal, a legal opinion from one part of the EU structure, dealing with one element of the FTT is pronounced sufficient to destroy the proposal. Well, as Joe Hill would have said “I ain’t dead!”

The fact that this story has got so much uncritical (indeed, staggeringly poorly informed) coverage in so many respectable journals is itself part of the story. The well-funded and staff-rich finance sector PR industry has yet again been in overdrive to blow up a minor story into front-page news. Finance sector’s bigwigs should beware of deluding themselves into believing they have won when they haven’t. And more importantly than that, FTT supporters should on no account believe the exaggerations of our opponents, although our rebuttal got little coverage (thanks, Heather!)

So what’s really happened? The legal service of the EU Council of Finance Ministers (just one small part of the EU legal service) has produced a legal opinion (not tested and not binding) that says one element of the proposed FTT (the residence principle, more below) may be contrary to the legal principles of the EU and therefore may have to be changed. Other parts of the EU legal service disagree, the European Commission disagrees, and the German government – for one – disagrees. I suspect that wouldn’t have made so many headlines…

First, what’s the substance of the argument? The proposed FTT rests on several principles defining which transactions would be subject to the tax. The residence principle, which this legal opinion is about (it’s quite explicit that “Other criteria to determine the applicability of the tax regime, be they already present in the proposal or otherwise conceivable, are not the subject of the discussion in this opinion”) says that the tax is paid whenever one of the seller or buyer is based in a country implementing the tax. It’s one of the measures designed to prevent people from moving to avoid the tax, but it’s not the only one. The issuance principle is the one which underpins the UK Stamp Duty, for example, which says that if the financial product being sold is registered in a country implementing the tax, then the sale is taxable.

The Robin Hood Tax campaign has always favoured the issuance principle, because it’s been shown to have worked (40% of Stamp Duty is paid by buyers and sellers based outside the UK), and it prevents transactions moving, rather than the parties to those transactions – so it’s more like VAT. We had to fight to get the European Commission to include the issuance principle in the FTT proposal, and it looks like that was a smart move.

Second, what’s the status of the legal opinion? Well the clue is partly in the name. It’s an opinion, not a fact – lawyers are like that, they can produce many different opinions, which is why the actual decisions are left to courts, rather than lawyers. Until tested in the courts, this is just a view, and it’s a view that the Commission’s own legal service doesn’t agree with. It’s the view of the lawyers who work exclusively for the EU’s Finance Ministers and it rather reflects the scepticism of finance ministries.

Third, what will happen as a result? Well, er, it looks like nothing. Both the EU Tax Commissioner, Algirdas Semeta, and the government most committed to the FTT, Germany, appear to have dismissed the legal opinion because of “second…” above. Semeta tweeted that “FTT is legally sound and fully complies with EU treaties and international law.” But even if the legal opinion was found to be correct, the FTT proposal would simply have to be amended slightly to stress the issuance principle instead, and it could be implemented as planned.

But, fourth, what does this tell us about the way that the FTT’s opponents operate, and about what we as supporters have to do in response? Throughout the campaign for an FTT, the finance sector corporate PR lobby has missed no opportunity topronounce the tax dead, finished, about to be scrapped, or – a subtle one, this,better replaced by something that would take far less money in tax from the admittedly greedy bankers. The German government has reportedly abandoned its support for the FTT on at least two dozen occasions over the past three years, and on none of those occasions has it been remotely true. Should journalists reporting on this be a little more sceptical, a little more willing to ask both sides of the debate for their opinion? Yes, indubitably. (As a further footnote, you have to wonder how this secret legal opinion was so quickly in the hands of the media – will there be a Snowden-style witch-hunt for the leaker? No, there won’t.)

Those of us who want a Robin Hood Tax (presciently reaffirmed by the TUC this week in a motion written weeks ago which pledged “continued support for the introduction of a financial transactions – or Robin Hood – tax, in the face of sustained finance sector lobbying against this”), the lesson is that we need to step up the campaign – especially in the media – to get the case put for democratic governments to decide who pays what tax, rather than the spin doctors of wealthy bankers.

Originally published on Touchstone blog on 13/09/13

Back our Million Strong campaign