Robin returns to the East Midlands 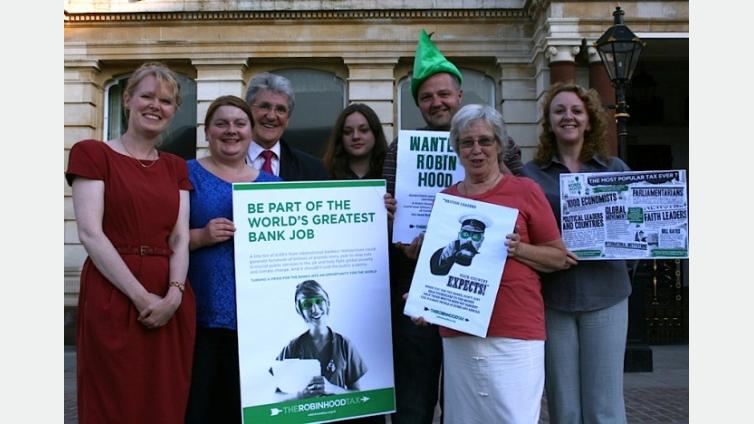 This week, our Bring Robin Home campaign has been given a real boost from councils across the East Midlands, passing motions to demand a Robin Hood Tax in the UK.

Earlier in the week it was confirmed that Bassetlaw Council were to table and discuss the Financial Transaction Tax (FTT). Bassetlaw represented not only the first council in the East Midlands to adopt our motion, but also the first in Nottinghamshire, our spiritual home!

Cabinet Member for Housing Cllr. Alan Chambers (Lab) proposed the motion, stating that he saw the Robin Hood Tax as "justice for ordinary people's pockets…we are seeing the cuts really starting to bite and ordinary people are suffering as a result, but I am pretty sure that the people of Bassetlaw didn’t cause the financial crisis, yet we are all paying for it. It’s about time that justice was done and the banks paid their share.”

Once the session came to a close, Bassetlaw Council leader, Cllr. Simon Greaves echoed the call for a Financial Transaction Tax, saying: “The Robin Hood Tax is justice, if we truly are all in this together.”

We couldn't agree more, Councillors! After Bassetlaw, we looked south to another council which has just agreed to lobby Westminster for a FTT.

In Northamptonshire, Labour and Liberal Democrat councillors joined together to vote through the motion, arguing that "at a time when unemployment was at 4.3%,  revenues from extending the tax could repair the damage caused by cuts in public services since 2010 and, if invested wisely, could result in a significant increase in employment levels."

In response to FTT critics, Corby Labour councillor Paul Beattie said: “There is overwhelming public support for this and I don’t believe the scaremongering in the city.”

The council is to write to Corby and East Northants MP Andy Sawford, Prime Minister David Cameron and Chancellor George Osborne stating its position on the FTT.