With Some 'Shameless' Support Unions Back the Tax 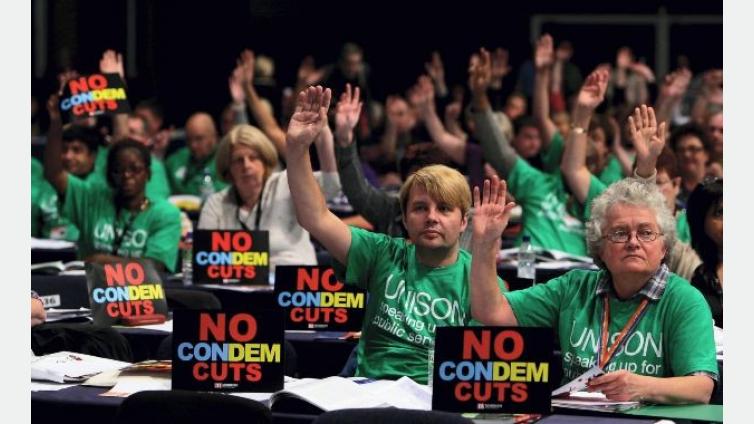 The Robin Hood Tax campaign video was shown in the main hall to over 800 delegates and numerous speakers over the four days pledged their support to the campaign as an alternative to the swingeing cuts being imposed by the coalition government.

On the fringe, a packed fringe meeting discussed whether Robin Hood could save our public services and protect the world's poor. The meeting was chaired by the GMB's Paul Kenny and addressed by David Threlfall, actor (Frank in Shameless/RSC) and campaigner and advocate for Save the Children, David Hillman from Stamp Out Poverty, Chris Keates from NASUWT and Polly Jones from Unison.

The speakers made the moral and technical arguments for a financial transactions tax, talking about this tax as a challenge to the 'there is no alternative' dogma pervading the debate on the economy.  David Threlfall spoke of his commitment to social justice, his experiences growing up in Manchester and the seriousness of child poverty in the area and what he has seen in the global south, on trips with Save the Children.

Chris Keates' union NASUWT submitted an amendment on the Robin Hood Tax that was debated by congress and she spoke of the need to protect education and public services but also to honour our obligations to the world's poor.

Polly Jones from Unison talked about how Unison have engaged their members on the campaign and the need for more unions get to more involved in the future direction of the campaign.

Trade union leaders were lining up to show their support for the campaign.

Sally Hunt, General Secretary of the University and College Union:

'If the oft-repeated maxim that 'we're all in this together' is to stand up to any kind of scrutiny then the government needs to demonstrate some commitment to exploring new and innovative ways to generate income to tackle the fallout from the global economic crisis and to pay for the recovery. At a time of economic crisis, it is the poorest communities at home and abroad who are most vulnerable, and so far they seem to be paying for it too. We remain astounded by George Osborne's commitment to slashing corporation tax for the biggest profiteers and his opposition to a Robin Hood Tax, would be a simple and effective way of making those that caused the mess to clean it up.'

'High roller casino capitalists in banks and finance caused the crisis, but we are left suffering the pain. A Robin Hood Tax will begin to right some disgraceful wrongs'

'Unison supports a financial transactions tax because it could raise £250 billion a year for international development, public services and tackling climate change, including £20 billion for public services in the UK. It is a simple and effective alternative to making cuts, where those responsible for the financial crisis, the banks, meet some of the costs.'

The strength of the International Trade Union movement added to the growing coalition of the Robin Hood Tax campaign and leaders from numerous countries backing the call there is still a very real opportunity to secure a Robin Hood Tax.

Previous : Could Banks Be Hit By an FAT Tax? Newsnight Reports
Next : Response to the EC's 'Vision for Taxation of the Financial Sector' Communique