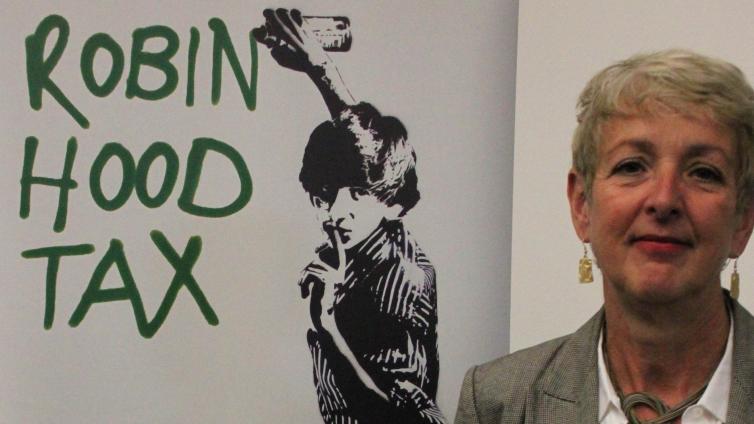 Taxing bankers can rebuild our public services
Gail Cartmail
International
Tweet
Gail Cartmail is the Assistant General Secretary of Unite, the UK's largest trade union with over 1.4 million members. Gail represents workers in both the public and financial services.

As the United Nations marks International Public Services Day, our own government is sharpening the axe for a renewed austerity offensive. Billions of pounds worth of vital services are to be slashed, accompanied by another fire sale as public assets from the Royal Mint to the Royal Bank of Scotland (RBS) are handed over to City investors at knockdown rates.

Over the weekend I joined thousands of members of my union, Unite, as we marched as part of a growing movement demanding an alternative to austerity. The Robin Hood Tax is central to that alternative. Not only does it expose the lie that cuts are inevitable, it readdresses the injustice at the heart of austerity. It makes those who caused the financial crisis of 2008 pay for the consequences.

It is estimated that this tiny tax on financial transactions like stocks, bonds and derivatives could raise up to £20 billion bounds annually. This far surpasses the bank levy (that generates £4 billion a year) in the teeth of fierce opposition from the boardrooms of the banks.

Yet when Chancellor George Osborne addressed the City elite at Mansion House earlier this month he preferred the role of the Sheriff of Nottingham to Robin Hood. Osborne announced £23 billion worth of sell-offs with Royal Mail, the Mint and the Met Office all lined up at bargain prices for City investors. Of all of these, selling the public stake in the two bailed out banks, Lloyds and RBS, is perhaps the most galling.

RBS received over £45 billion from the taxpayer in 2008, just part of the banking bailout which cost each UK household £46,000. In return the Treasury received an 80% share in the bank. Now the New Economics Foundation estimate that the public are set to lose over £13 billon on our investment as Osborne sells our stake at a massive loss.

Such astronomical figures serve to remind us of the debt senior figures in the biggest banks, hedge funds and city firms owe to us. Yet the Robin Hood Tax is not an exercise in 'banker bashing'. It targets the parts of the finance sector most responsible for the crash and to succeed it must be linked to the need to change the banks from within.

Our savings, pensions, student loans and mortgages all give us a stake in the banks. We would all benefit from a socially responsible finance sector that pays its way. However, the sharp truth is that neither the Robin Hood Tax nor the reforms our banks need will be gifted to us from the top. Change can only be fought for from below and supporters of the Robin Hood Tax will find a willing ally in bank workers.

Since 2008 many senior and investment bankers have acted as if the crash never happened. It's rare for a week to go by without one of the major banks being splashed across the front pages. Yet while regulators have issued huge fines and the bank levy is supposed to make the industry pay back its debt to the taxpayer, these costs have continually been handed down to the workforce who are being forced to pay for the misconduct of the boardrooms.

The latest example is HSBC. Britain's largest bank has announced a further 8,000 job cuts across the UK just as the bank faces being dragged into the corruption scandal engulfing FIFA. This new wave of job cuts follow the 53 branch closures made by HSBC in 2014.

Indeed HSBC accounted for 20% of all branch closures over the past ten years and there is little sign of this assault on local communites stopping. The Campaign for Community Banking estimate 600 local high street branchs from across the major banks are set to close their doors this year.

The workers who remain face a rapidly widening gulf between ther pay and that of senior bankers. The gap between front line and boardroom pay has risen from 81x to 130x, a polarisaton of pay that reflects the concentration of power at the top.

Across the banking sector Unite members are organising and articulating a powerful, collective voice to demand change. It is a voice that demands an end to the assault on pay, terms, conditions and pensions. It is a voice that holds senior figures accountable for their actions and brings transparency to the boardrooms.

Most importantly, it is a voice which recognises that being a good employer goes hand in hand with social responsibility. This collective voice demands that bank executives pay what they owe, both to the workforce and to the public.

As trade unionists these bank workers march alongside you in your fight against austerity and injustice. It is vital that we stand beside them and support their fight for the banking system we all deserve.