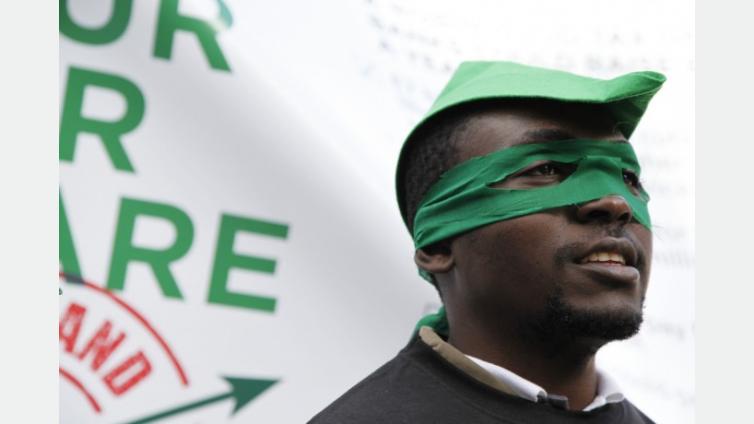 It's amazing how much can happen in twelve months. And what has happened has been amazing. The Robin Hood Tax has moved from being a great idea with some support to being talked about by world leaders, hitting the headlines across the globe, and Bill Gates, the Vatican and 1,000 Economists lining up in support.

And it's no exaggeration to say this couldn't have happened without your support. There are plenty of great ideas, but the ones that catch on are the those that people choose to support: to email about; share on Facebook; write to their MP about; march for and even paint their car for. So thank you, and here is a quick summary of what you made happen this year.

French President Sarkozy set the tone for the year by taking to the stage at the World Economic Forum in Davos in front of the most important people from business, industry and politics, and laying out his plans for a Robin Hood Tax. He said, ‘Bankers and financiers must begin to understand that they have a real responsibility to the real economy’.

As bonus season saw banks return to record profits and bonus packages, people took the streets in England, Scotland and Wales visiting major banks to present a Final Demand Bill calling on them to pay a £20 billion Robin Hood Tax back to society.

The next week saw thousands of people from Argentina to Australia, Spain to Senegal, and Brussels to Brazil joining in the protest and asking the G20 leaders to implement a Financial Transaction Tax on the banks.

And it wasn't just people power. Bill Nighy went on the BBC Breakfast couch to challenge the CEOs of the UK's four major banks to accompany him on a trip across the UK and to Africa to look at the impact of casino banking. More than 20,000 of you joined this call – the banks politely declined.

The Robin Hood Tax was proud to join in with the March for the Alternative, which saw half a million people from around the UK join together on the streets of London. From green hats on kids to the speeches it was clear a Robin Hood Tax was a great alternative.

The European Parliament also voted in favour of a Robin Hood Tax, joining France, Germany, Spain and Austria in backing the tax. Whilst not legally binding, this sent a clear signal of support.

Faith groups also got involved at the end of the month, with CAFOD, The Salvation Army and Tearfund holding a debate on the Robin Hood Tax at St Paul's Cathedral in London.

We hit the road to see what the banking crisis meant for people in the UK and to look at the difference the tax could make. We travelled the length of the country visiting everywhere we could from SureStart centres to food banks and homeless charities.

And as the G20 Finance Ministers met in Washington, 1,000 economists (including Nobel Laureates) wrote a joint letter urging them to adopt a Robin Hood Tax at the Summit in November.

Robin Hood Tax campaigners joined angry shareholders and protesters at the HSBC Annual General Meeting. We  asked why HSBC prioritises pay above helping those who were hit hard by its casino banking business model.

Over 1,200 campaigners travelled to Westminster to lobby their MPs about a Robin Hood Tax.

Over in the City, as bankers had their annual champagne-fuelled Mansion House Banquet the Robin Hood Tax campaign set up its own super casino opposite to remind them of the real life consequences of their reckless gambling. The event made the headlines of BBC News, Channel 4, Sky and Al Jeezera, with footage of ‘bankers’ betting monopoly money on health workers, patients, public service workers and mortgage owners on a life-sized roulette board.

Globally, things were hotting up with actions in 43 countries across 5 continents. People in all corners of the world united in sending out a message to the financial sector: it is time to help solve the crisis that you caused.

In Europe, public support was growing with polls showing that 61% of Europeans are strongly in favour of a Robin Hood Tax with 65% in favour in the UK, while the European Commission proposed a tax on financial transactions in the EU.

Robin headed to No. 10 Downing Street to deliver a letter to David Cameron urging him to adopt a Robin Hood Tax to combat poverty in the UK and abroad.

The Robin Hood Tax Campaign gatecrashed the bankers’ summer ball to find out what bankers really think about the crisis and taxing the banks.

Meanwhile, the IMF released a new paper exploring the feasibility of Financial Transaction Taxes, concluding that they are ‘no more difficult, and in some respects easier, to administer than other taxes’.

Thousands of nurses across America took action in 21 states to demand a Financial Transaction Tax on Wall Street to ‘heal America’.

The campaign received a huge boost when Microsoft founder Bill Gates came out in support of a Robin Hood Tax as a way of raising money for good causes.

And in the run up to the G20, we gave you the chance to make the news by appearing in a Robin Hood Tax Campaign video with Bill Nighy.

As the G20 loomed, we got even more support from a variety of influential people including the Dutch Prime Minister, Archbishop Desmond Tutu and the Pope.

All over the world, Occupy protesters took part in a global day of action for a Robin Hood Tax. From marches in New York to canoeing Robins in Chicago and a picnic in Bristol, it was another great display of public support for the tax.

In the UK, supporters paid for billboard advertising in Tube Stations across London asking David Cameron and George Osborne to back a Robin Hood Tax at the G20 Summit.

Not content with paying for an advertising campaign, over 80,000 people in the UK wrote to David Cameron asking him to back a Robin Hood Tax at the G20 Summit in Cannes.

This public support was helped along by Rowan Williams, the Archbishop of Canterbury, whose support for the tax made the front pages the day before the G20. We never thought we'd see the day when the Robin Hood Tax would be on the front page of the Daily Telegraph and the Financial Times.

On the day before the Prime Minister was due to leave for the G20 Summit in Cannes, supporters descended on Westminster to lobby MPs on their way into work. Caroline Lucas MP added to the public pressure on David Cameron by asking him during PMQs whether he intended to support a Robin Hood Tax.

Over in Cannes, Bill Nighy joined with nurses from the US to ask the G20 leaders to back a Robin Hood Tax, while protesters marched through the streets of Nice calling for a Financial Transaction Tax on the banks.

At the G20 Summit, a group including France, Germany, Brazil, Argentina, South Africa and UN Secretary General Ban Ki Moon backed a Robin Hood Tax, and the link between the tax and fighting poverty and climate change became clearer than ever. Bill Gates also presented his report advocating Financial Transaction Taxes for their practicality and revenue-raising potential. Unfortunately, amidst all this progress, our own government remained one of the key blockers, with even the USA and Russia progressing.

At the COP17 Climate Summit in South Africa, campaigners pushed delegates to implement a Robin Hood Tax as a way of funding climate finance. The support kept coming, as the Belgian and Italian governments as well as Al Gore and former UN Secretary General Kofi Annan got on board with the campaign.

What a year! 2012 has the potential to be even bigger but we must remain clear that revenues raised from a Financial Transaction Tax should not be used to bail out European banks or top up the European Commission budget.

It is only a Robin Hood Tax if proceeds are also used to protect frontline services, fight poverty and tackle climate change. Thankfully, the French and German leaders both agree that proceeds should be used in this way.

So, the UK government has decided to let the financial sector off the hook once more, whilst the rest of Europe progressively moves forward in promoting a Financial Transaction Tax that will curb banks’ reckless gambling whilst raising billions in desperately needed revenue.

Here in the UK we’ll keep piling the pressure on our government over the coming months to make sure they put the people before the banks.