Thousands of nurses march in Chicago for Robin Hood Tax 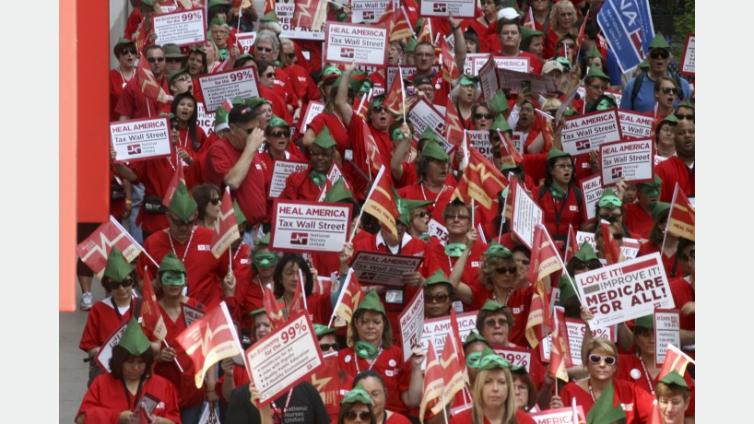 More than 3,000 nurses and activists gathered in Chicago on Friday to call for a Robin Hood Tax on financial transactions. This tax on speculative transactions between financial institutions could raise up to $350 billion a year in the US, money desperately needed in American communities.

“It's time for Wall Street to start paying what all the rest of us pay,” Karen Higgins, co-president of National Nurses United, told the crowd.

Other nurses told how they have witnessed the economy hurting families and communities across the country. “I've been a nurse for 38 years and I have never seen our communities in such disarray and in such suffering as I have in the last couple of years,” said Deborah Burger, NNU co-president. “They got us into this mess and they have the money to bail us out.”

More than 100 organisations from community, environmental, union, and health groups from around the world endorsed the event.

The rally ended with a performance by music legend Tom Morello, who has played with bands Rage Against the Machine and Audioslave.

Before the rally, nurses attended an international panel discussion on global austerity and ways to fight back, including the Robin Hood Tax.

“It’s so important we have a strong Robin Hood tax campaign,” said Jörn Kalinski, Oxfam Germany director of lobbying and campaigns. “We need America to come around on this issue.”

Previous : The economic case for the Robin Hood Tax
Next : EU leaders: put your Robin Hood hats on