Flags of the V20 - the most at risk countries in the world from worsening climate change. 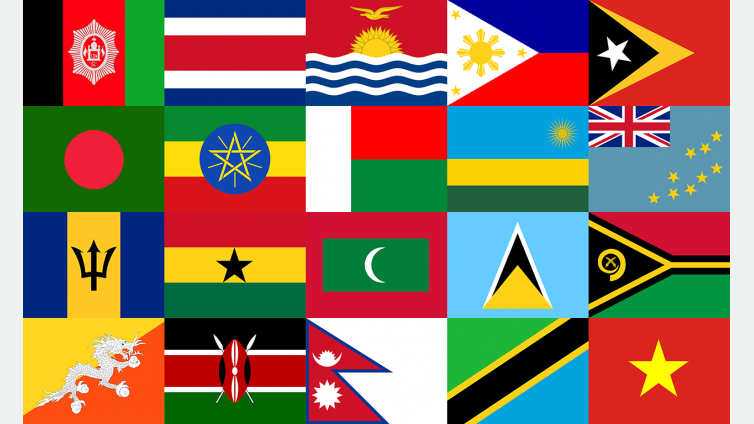 On the weekend, the world’s finance ministers met in Lima, Peru, to decide where they’re going to get the money for the climate response. The world’s richest countries have promised to raise $100bn to help poorer countries deal with climate change.

But they’re still some way from their target. If they fail to raise the money within the time, it could have very serious consequences for millions of people on the frontline, facing extreme climate change.

Enter the V20: a new group of the top 20 states most at risk from the catastrophic effects of climate change. From Afghanistan to Vietnam, these countries’ finance ministers have thrown down the gauntlet to the world’s most powerful nations to step up and close the funding gap.

One of their demands is to raise the climate funds through a global Robin Hood Tax. The head of the UN Development Programme praised the V20’s vision to “deploy innovation in finance”, noting that ideas like the Robin Hood Tax could help “knock down barriers” to climate action.

The finance minister from the Philippines (one of the V20) argued that these countries’ economies would stand to lose more than $400bn by 2030 if targets were not met (not to mention other costs to human life and the environment).

With the V20 representing some of the world’s poorest countries, there’s little hope of them coming close to affording this amount by themselves. Nor should they be expected to foot the bill. The countries with the greatest carbon footprints also happen to be those with the largest financial markets, such as the US and the UK. It is surely both reasonable and fair to tax these markets more and use the funds to both help people adapt to climate change.

This money could then be used to help countries adapt to rising sea levels by setting up early warning systems for increased storm surge and flooding; or preparing them for droughts by breeding crop varieties that are more tolerant of heat and drought.

By acting together, the V20 recognise that they can have a stronger voice at these negotiations and beyond. In these crucial months before world leaders meet at the global climate summit in Paris, we need the G20 to heed the call of the V20: to make sure that the financial sector is doing its bit to help combat climate chaos.

Help us promote the world's most popular tax:

Previous : Global Goals - what’s the big deal?
Next : Robin visits every major party conference - thanks to you!