A Tour In The Heart Of The City 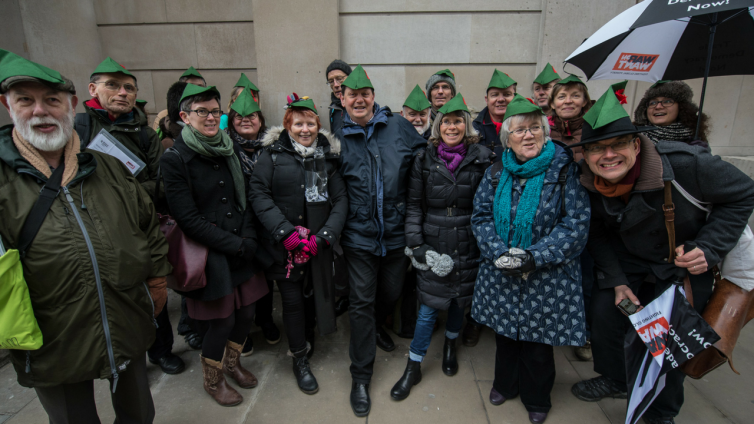 A Tour In The Heart Of The City
Dave Hillman, Robin Hood Tax
Action
Tweet

“The financial sector is a gambling addict in denial of its addiction,” I said, trying  to summarise the financial crash as concisely as I could. I was giving a talk, you see, on a walking tour of the City of London, addressing a group of 25 warmly dressed people, outside the Bank of England. It was February and freezing and I was thinking that brevity might just be a way to prevent frostbite. “This is both why the crisis happened”, I continued, “and why, 10 years on – as the sector hasn’t changed its behaviour – the next crisis is almost certainly around the corner.”

Mine was stop 5 on an 8-stop tour. 50 campaigners in total – 2 groups of 25 – had braved the cold to learn about finance, trade and power, visiting locations like the old East India Company warehouses and various corporate lobbying firms ending up at St. Paul’s Cathedral, site of the famous Occupy protest.

At my stop, both groups, in turn, joined me in wearing Robin Hood hats as I told them how since the crash, the bankers who caused the crisis, had paid themselves more than £100 billion in bonuses whilst, over the same period, public sector workers had effectively seen a drop in wages. “Surely”, I argued, “it's the casino traders who should have been suffering austerity for messing up the economy, not ordinary citizens who have lost quality jobs to zero hour contracts and seen savage cuts to the country’s public services”.

This winter, our hospitals have been stretched to breaking point with A&E units reporting their worst January on record, food banks have never been so busy and thousands of homeless people are now commonplace in towns and cities across the land.

“Enough is enough,” I shouted, to be heard above a passing bus. “What are the government waiting for! Why don’t they bring in the Robin Hood Tax? It would generate an additional £5 billion a year in revenue, sufficient to plug last year’s NHS funding gap, fix the adult social care crisis, hire twenty thousand new teachers with money left over to build 80,000 affordable homes. It would also stop the worst sorts of speculative trading – helping to rewire the financial system, potentially preventing another crash.”

“What’s not to like,” I concluded. As the group headed to their next stop, I ducked into the nearest café to thaw out with a most welcome cup of hot tea.

Support our campaigning call to hold bankers to account

Previous : The Robin Hood Tax in Illinois: Organising for a LaSalle Street Tax
Next : The crash that shook the world