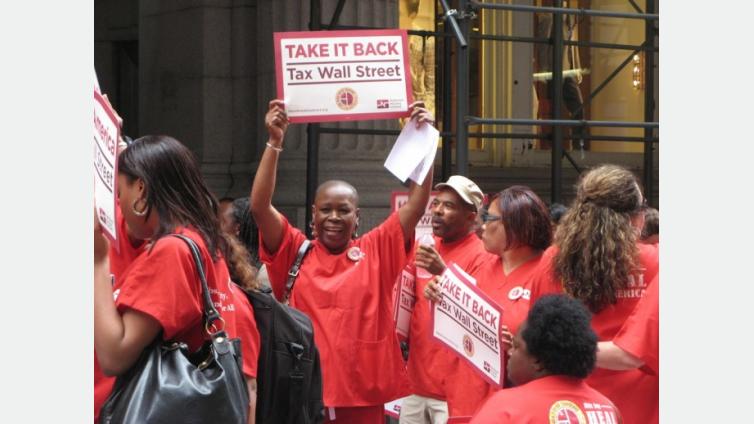 A leading US nurses union is speaking out in support of a Robin Hood Tax. Yesterday RoseAnn DeMoro, executive director of National Nurses United, was interviewed on Bill Moyers' current affairs program about how the tax would help the poorest and most vulnerable in the US. National Nurses United is the largest union and professional association of registered nurses in the country, with 170,000 members.

The interview focuses on the union's call for a Robin Hood Tax, a sales tax on Wall Street speculation, that could raise up to $350 billion a year in revenue.

"The money generated," says Bill Moyers in the program note, "could be used for social programs and job creation - ultimately to people who, without a doubt, need it more than the banks do. Though the power and influence of Big Banking is intimidating, DeMoro and her organization have an inspiring history of defeating some of the toughest opponents in government and politics."

The nurses see the enduring effects of economic hardship on patients and communities across the nation, says DeMoro.  The revenue from the Robin Hood Tax is the first step to healing distressed communities and setting the United States on the road to a real recovery.  More than 40 countries, including many of the fastest-growing economies, already have such a tax, and it may well be adopted European Union-wide this year

On Friday, May 18, DeMoro and NNU members and community members, will gather in Chicago to call for the tax, joined by representatives from the UK, Italy, Canada, Guatemala, Germany, and South Korea.

The event, which includes a performance by renowned musician Tom Morello, The Nightwatchman, takes place prior to G-8 meetings at Camp David, Maryland and a meeting of NATO countries in Chicago.  It has been endorsed by more than 100 organizations of labor, environmentalists, and consumers.