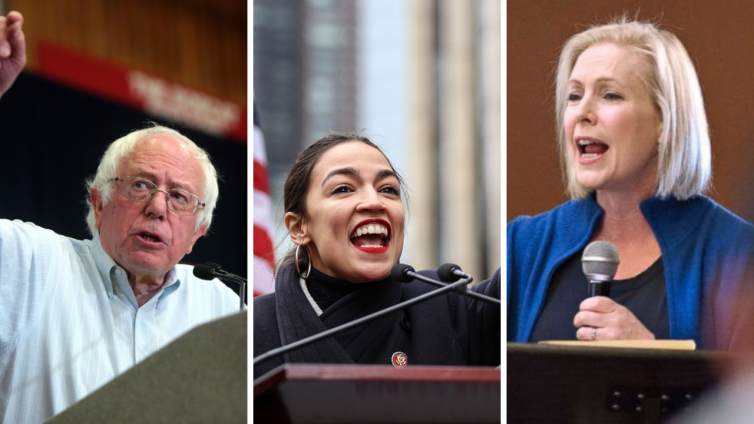 After about a decade of active campaigning, U.S. financial transaction tax advocates are seeing a boost in momentum. With surging progressive populism and intense campaigning for the 2020 presidential election, the idea of a small tax on financial trades is gaining steam.

Of the 16 Democrats who’ve launched bids for the presidency so far, five have supported a financial transaction tax. This dynamic could make the tax a key litmus test to determine where the candidates stand on the issue of excessive Wall Street power. In the last presidential race in 2016, Democratic nominee Hillary Clinton struggled with her image as an advocate for wealthy financial industry donors.

At a time of skyrocketing popularity for big new U.S. programs, like universal health care and a Green New Deal, a financial transaction tax has the potential to be a key source of revenue.

The candidates who support such a tax include Senator Bernie Sanders, who has been topping the polls among “already announced” candidates. He was the first to push this issue into the center of the U.S. political debate during his 2016 presidential campaign. Clinton, who beat Sanders for the Democratic nomination, never publicly supported the tax, but labor unions and other movement groups managed to secure favorable language in the 2016 Democratic Party platform.

Another 2020 candidate, Sen. Kirsten Gillibrand, recently co-sponsored a new bill that would impose a 0.1% tax on financial market trades. Modeled on the original European Commission proposal, the bill was introduced on March 5, 2019 in both the Senate and House of Representatives. Of the various financial transaction tax bills that have been introduced over the years, this model has received the largest official revenue estimate. According to the Congressional Budget Office, the bill would generate $777 billion over 10 years.

On the Senate side, the bill has four initial co-sponsors. The House version has 18 co-sponsors so far, including Congressional Progressive Caucus co-chairs Rep. Pramila Jayapal and Mark Pocan and 1st-term Rep. Alexandria Ocasio-Cortez, who enjoys a massive base of supporters.

Presidential contender Sen. Kamala Harris, who’s been coming in second after Sanders in many polls of official candidates, expressed support in the last congressional session for a Sanders bill that would use revenue from a financial transaction tax to pay for free tuition at public universities. This bill, which would tax trades of some financial instruments at a higher rate and others at a lower rate than the recently introduced proposal, has not received an official revenue estimate.

Finally, candidates Rep. Tulsi Gabbard co-sponsored a transaction tax bill in the last congressional session and Senator Elizabeth Warren has broadly supported a Take on Wall Street campaign that has such a tax as one of their core demands.

With the U.S. election nearly two years away, anything could happen before people actually cast their votes. But polling indicates strong support across the political spectrum for tax policies that hit the wealthiest Americans, as well as tougher policies to rein in Wall Street.

A 2019 Fox News poll found that 65 percent of Americans support raising taxes on those making over $1 million per year. A financial transaction tax would fall overwhelmingly on the rich, who own the majority of U.S. securities and represent a much larger share of those profiting from the high-frequency trading that would be hit hardest by such a tax.

Other polls have found very low opinions of the financial industry. In one survey, Americans viewed the big banks as second only to health insurers among industries that need more regulation. The Take On Wall Street campaign conducted a 2018 survey in key battleground districts that revealed overwhelming, broad-based, and intense support for curbing big banks’ influence in Washington.

In a rational political world, the U.S. Congress would’ve adopted this type of tax immediately after the 2008 crash, while the wounds of a financial system run amok were fresher and even deeper than they are today. But politicians tend to take awhile to catch up to the general public. The current political moment might finally be the time for real progress.