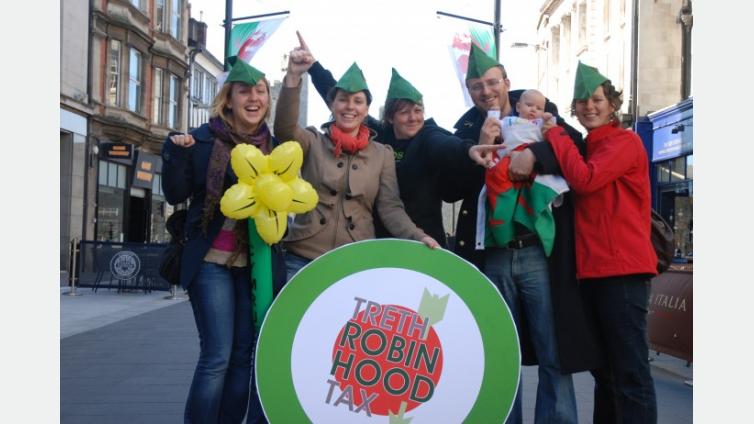 Stephen Doughty looks back at a week that has highlighted the redistribution potential of a levy on financial transactions.

This has been a big week for a small tax. The Robin Hood tax international week of action has put the idea well and truly on the global map. Major developments have taken place in the USA, and yesterday the European Parliament voted in its favour with a huge majority. For those who haven’t heard, it’s known as the Robin Hood tax because, literally it takes from the rich – in this case banks and investment firms – and gives to the poor.

It is a tiny tax because it is less than half of 1 per cent on financial transactions. It may be tiny but it could raise huge sums, running to billions of pounds. Conceptually similar to the Tobin tax, it would affect a wider range of asset classes including the purchase and sale of stocks, bonds, commodities, unit trusts, mutual funds, and derivatives such as futures and options. The Tobin tax was proposed for foreign currency exchange only.

A UK based global campaign for the Robin Hood tax was launched in February 2010 and is being run by a coalition of over 50 charities and organizations, including Oxfam, Christian Aid, Comic Relief and UNICEF.

By last autumn, the Robin Hood campaign had gained considerable extra momentum and support from prominent opinion formers, with a proposal from the European Commission to implement a financial transaction tax at EU level set to enter the legislative pipeline. The campaign also attracted extensive criticism, with a global implementation of the FTT tax being opposed by a number of G20 members – including the UK Government at the November Summit.

However, the past week’s internationally-co-ordinated campaigning for the Robin Hood tax  has focused the world’s attention on what this tax could do, and in the UK it could  generate upwards of £20 billion annually. If implemented in the USA and across Europe the tax could raise over £176 billion pounds a year. If agreed globally as much as £250 billion a year could go to vital needs like tackling poverty and climate change.

People across the world are making sure that this is one item that will stay top of the agenda. Last week, the US National Nurses Union demonstrated in Chicago. This week, German campaigners staged a mock marriage between Chancellor Merkel and President Hollande ahead of their meeting on Tuesday to emphasise the fact that the FTT is one measure they can agree on. A worldwide momentum is inching ever closer to making the Robin Hood Tax a reality.

Pressure is also coming from new quarters, including a group of United Nations independent experts who have urged the EU to take the lead in promoting the adoption of a global financial transaction tax to offset the costs of the enduring economic, financial, fuel, climate and food crises, and to protect basic human rights. A report from these experts says:

“Where the world financial crisis has brought about the loss of millions of jobs, socialized private debt burdens and now risks causing significant human rights regressions through wide-ranging austerity packages, a financial transaction tax is a pragmatic tool for providing the means for governments to protect and fulfil the human rights of their people”.

In Wales, we have already seen great support from our Assembly Members with over a third signing up in support – from three parties. First Minister Carwyn Jones became the first Government leader in the UK to publicly back the Robin Hood Tax. This has now been followed by support from Scotland’s Alex Salmond.

Money raised through the tax could fight poverty at home and overseas – crucial when we see rising numbers of people here in Wales struggling to make ends meet, and those in the world’s poorest countries already bearing the brunt of the financial crisis of the past years.

It could also tackle climate change which we know is already affecting the poorest people across the world either threatening their livelihoods and, in more severe instances sometimes, their lives. Some of the funds raised through the Robin Hood Tax could provide the much needed money to pay for low-carbon and adaptation measures when global agreements on how to pay for these have made far too little progress.

Predictably, the financial services naysayers are out in force forecasting doom if this tiny tax was ever implemented.

But it’s important that we set the record straight. The Robin Hood Tax would not affect retail banking and impact on individuals’ savings and mortgages. Instead it would target the casino style banking that caused the financial crisis in the first place – the often speculative trading on shares, bonds, foreign exchange and derivatives.

It could not be argued better than as Magdalena Sepúlveda, the UN Special Rapporteur on extreme poverty and human rights has put it:

“When the financial sector fails to pay its share, the rest of society must pick up the bill. It is high-time that governments re-examine the basic redistributive role of taxation to ensure that wealthier individuals and the financial sector contribute their fair share of the tax burden.”

What is remarkable is how a growing number of figures in the business world are now vocal in their recommendation for the tax to be implemented. Leading business figures across the world such as Bill Gates, Warren Buffet and George Soros have backed the proposal. Over a thousand of the world’s leading economists have also backed the tax and the IMF and the European Commission have both said that it’s feasible.  200 organisations across the EU have written ahead of EU Growth Summit.

Furthermore, a new study from leading economists – Stephanie Griffiths-Jones and Avinash Persaud – shows that taking the positive and negative impacts of the tax together estimates that the net effect would be to add at least 0.25 per cent to GDP not reduce it.

Opponents are simply scaremongering in order to protect special interests. Persaud, who is the founder and Chairman of Intelligence Capital, has made this clear recently, saying that the tactics employed by London bankers today with regards to the proposal for a financial transaction tax are the same as those used by the tobacco industry many years ago. He calls it a “deliberate obfuscation”.

This misleading narrative is what we must expose and counter by galvanising the public to demand that this small piece of justice must be delivered to the benefit of the people here and abroad.

Schopenhauer’s famous words are a perfect summary of what is now happening in this campaign and give hope that the journey of the financial transaction tax is most certainly heading towards reality – “All truth passes through three stages. First, it is ridiculed. Second, it is violently opposed. Third, it is accepted as being self-evident.” World leaders have the biggest opportunity in decades to get this right. Change can lead the way. The time for action is now.