We Won't Be Silenced 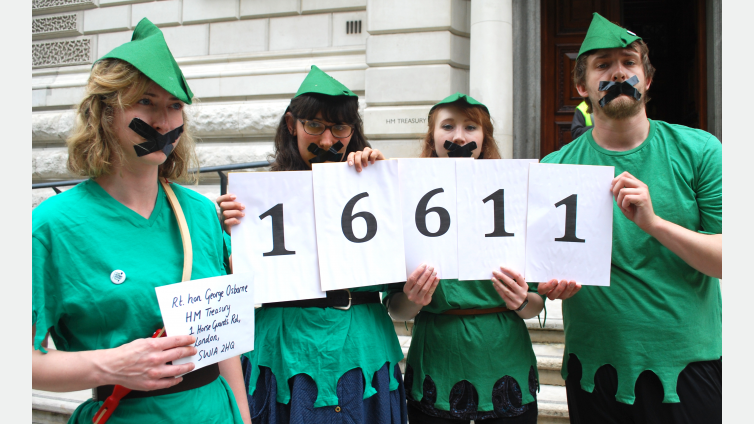 “It looks like a bloody book”, was the response from one official at the Treasury, when a band of Robins presented him with a formidable petition this week.

But then, that’s what a petition with over 16,500 signatures urging the Chancellor to drop his legal challenge to the European Robin Hood Tax looks like.

Arriving outside Horseguards Parade, the Robins set up camp with our petition, placards and a letter addressed to the Chancellor demanding that he stop defending the interests of the financial sector by attacking a tax that could help alleviate poverty here in the UK and abroad.

Although starting out life as an e-action, the Treasury saw fit to block emails coming from our website. So we decided to do the only sensible thing: if they wouldn’t listen to us online, then we should deliver people’s voices in person.

Fitting black tape over our faces and holding the total number of actions taken sent a strong message to the Chancellor: that you can try to silence our protests, but the numbers speak for themselves. We will continue to campaign against your legal challenge until it is dropped.

Previous : How our opponents spin the news - and what we should do in response
Next : Let Them Eat Cake