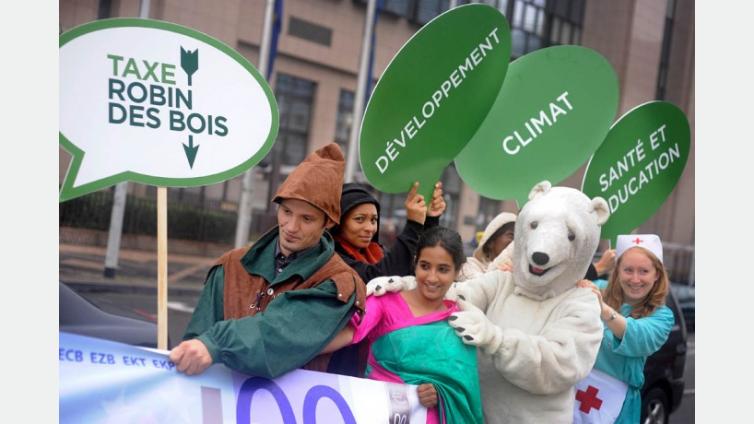 As the heads of EU governments meet at the end of this week, campaigners from around the world will be carrying out a series of events for the Robin Hood Tax Global Week of Action to remind leaders that the time for a Financial Transaction Tax is now. It’s time to reflect on how far the campaign has come, and how far we’ve still got to go. But make no mistake, this is a campaign that is on its way to victory.

The Robin Hood Tax campaign has been staggeringly successful in several respects. When the idea began to surface in 2009 – Adair Turner’s speech in the summer, Gordon Brown’s intervention at the G20 Finance Ministerial in the autumn – it was obviously an old one in some ways: John Maynard Keynes first proposed a transactions tax in 1936 and James Tobin had suggested a currency transactions tax in 1973. But the relatively recent rapid growth of the derivatives market meant that the call for a Financial Transactions Tax (FTT) was qualitatively new, especially because for the first time it would be not just a market regulator as Keynes and Tobin had proposed, but a major money-spinner. And as the IMF have reported, at least 16 of the G20 economies have had some form of FTT in place over the last decade or two.

The call for a full-blooded FTT – shares, derivatives, currency – was slammed by the IMF, the Financial Times (mostly by omission), and many commentators. But our massive popular appeal (250,000 supporters on Facebook, and majority support in polls across western Europe) got us through the front door of the media, governments and international institutions. That and the support of a growing number of civil society organisations and economists (350 holders of a PhD in economics signed a letter in support a year ago: the latest attracted over 1,000). Even some banks have supported the idea.

Two major multilateral institutions, the IMF and the European Commission, have been converted from slamming the idea as unrealistic to admitting that it is feasible and progressive. Now Bill Gates is working on a report on innovative sources of funding for development for the French G20 Presidency. Governments in the developed economies where the financial transactions primarily take place (and where the tax would therefore be levied) and in the developing and emerging economies which would benefit from spending the income on development aid and tackling climate change, have come out in support. And as concern over speculation has grown, those worried about such things have become more supportive (most recently UNCTAD, who have backed an FTT to tackle commodity speculation, following the leader of UNAIDS last summer). The European Parliament, the French, German and Spanish Parliaments have all recently carried resolutions supporting an FTT. So has Brazil’s, the joint ACP-EU Parliamentary Assembly, and Francophone African Finance Ministers. The Governments of Austria, Belgium, Bolivia, Greece, Luxemburg, Slovakia and South Africa are also in favour.  At international events on development or climate change (as with the Bonn talks this week) there are now always FTT campaigners present, and this month’s Global Week of Action follows on from earlier events in May 2010 and February 2011.

Not everyone is convinced, and there are still arguments to be had about how to implement FTTs: such as gradually implementing currency levies, stamp duties on share transactions, and then on derivatives. We still have to convince some people that financial institutions won’t shop around if some countries adopt FTTs unilaterally; that the costs will not be passed on to ordinary people because they will mostly be paid by high net worth individuals; that FTTs will reduce speculation and uncertainty rather than increase it; and even that overseas aid and tackling climate change is possible or desirable.

But the argument now is really about “how” and “when”. Some people won’t support an FTT until those technical details have been ironed out, while others accept that – as with almost every other tax – those are questions to be determined once the principle has been adopted.

So here’s the timetable. This week at the European Council meeting, heads of government will still be debating both “whether” and “how”, and an FTT probably won’t be on the official agenda. Next week, or in July, the European Commission will publish its impact assessment on FTTs (as well as other banking taxes) and will reveal that FTTs are feasible (as we already know from the IMF study – but as recently as April, diehard opponents in the Commission held sway). As European Union or Eurozone countries move closer to an agreement in principle during the autumn, the G20 summit in Cannes in November and the COP17 UN climate talks in Durban in December will probably see a coalition of the willing emerge – countries that are willing to start down the path of extending the FTTs that the IMF have already identified as being in place. It will take 2012 and maybe 2013 for those taxes to be introduced, and a couple more years before it becomes clear enough that the sky has not fallen in for other governments to realise either that they now have cover to be brave, or reason to catch up.

By the time the world reaches the deadline for achieving the Millennium Development Goals in 2015, we should – at last – have the means to pay for them in place. This week’s campaigner actions across the globe will be another step along the way to the introduction of a Robin Hood Tax, but it seems surer than ever that this is now only a matter of time.

Want to get involved check out our handy lobby kit here >>

Filming your event? Download this great toolkit with all the info you need >>

Previous : Why the banks' threats of moving abroad are empty
Next : New Report: Europe should grasp opportunity for £185bn Robin Hood Tax