Welcome to the latest member of the Robin Hood Tax family: Ireland! 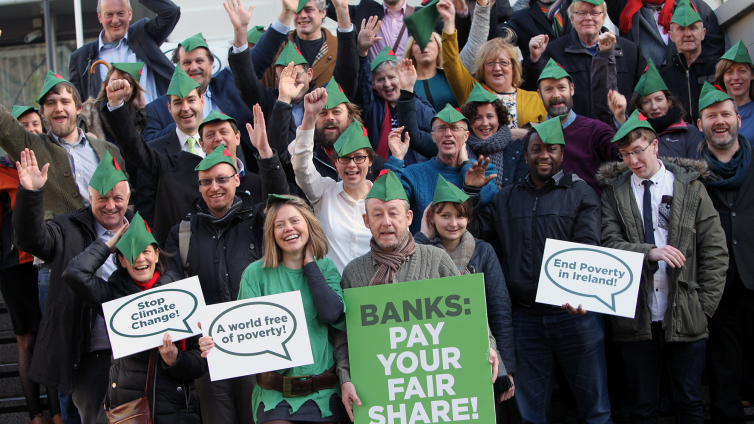 As the Robin Hood Tax train gets ready to leave the station on mainland Europe, there’s one small country that would have plenty of reasons to get on board: Ireland.

So we’re excited to announce that Robin Hood Tax Ireland (RHTI) has launched this week! And it’s needed now more than ever.

The Irish banks have so far managed to avoid footing the bill for a crisis they helped cause. And as one of the European countries hardest hit by the banking crash, it’s been the Irish people who’ve paid the highest price:

> Each Irish citizen is paying a debt of 9,000 Euro for the crisis, compared to the average 192 Euro per person across the continent;

> Last year more than 30% of Irish people were officially found to be deprived;

> One in ten is at risk of food poverty.

This can’t go on.

So on Tuesday, we joined campaigners representing many of the 40 different Irish organisations to demand an end to business as usual for the banks. Irish charities, trade unions, faith organisations, environmental groups are calling on their government to join the European Robin Hood Tax project.

Anna Visser from RHTI explained how the Robin Hood Tax would be a great way to curb the sort of speculative trading that caused the crash, as well as raising the much needed funds to invest into Irish society and its global commitments.

We then heard from Micheál Collins of the Nevin Economic Research Institute who has estimated that the tax could raise 1bn euros every three years for the Irish exchequer. And then our very own David Hillman explained the history of the international campaign and how Ireland has an opportunity for payback time from the banks.

After the speeches, all of us went outside for a photo stunt. The campaign has already made a splash with David joining our Irish colleague on primetime breakfast radio, national newspapers writing about the launch and #MakeBankersPay trending on Twitter!

Robin seems to be making a big impact across Ireland. After the launch, we joined the Irish campaign in meeting politicians from major political parties. It'll be the job of the Irish campaign to make them see sense on this no-brainer issue.

Why they need Robin now.

The financial crisis and recession have left massive holes in the Irish public finances and this revenue could help solve a lot of the problems that the financial institutions in Ireland have helped create:

> It could be used to invest in the transitions we need to mitigate and adapt to climate change as outlined in the Paris COP agreement in December;

> It could help honour poverty reduction targets laid out in September’s Sustainable Development Goals. It could reinforce international support for global equality. The Irish aid budget today stands at just 35 cents in every 100 euro - a Robin Hood Tax could do so much more.

Elections in Ireland are looming and the campaign aims to put pressure on political parties to commit to implementing a Robin Hood Tax when elected. The Irish Government has so far resisted opting into the European FTT, but with the backing of the likes of Germany, France - as well as over a million actions! - we need to keep the pressure up. It’s never been a better time to make banks pay their fair share.

Back the Irish campaign now

Previous : Help us level the playing field against the bankers
Next : Why The Big Short is a film for now