What a year that was! 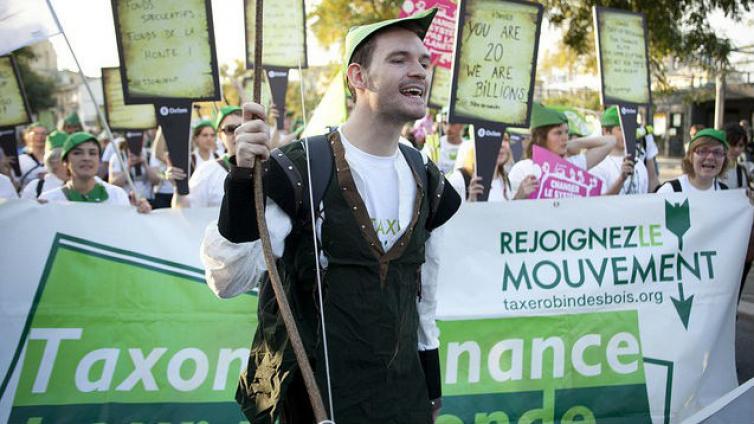 What a year that was!
Robin Hood
Action
Tweet

2013 was a year of progress - with international Robin Hood Tax agreements , civil society activities and hundreds of thousands of supporter actions.  And it’s needed now more than ever. Austerity across Europe and America has led to increased rates of poverty; deep cuts to public services; and failing commitments to the fight against climate change. All the while, we’ve watched the same financial sector (that caused the crisis) fail to change their ways, sprawling from one scandal to the next, all the while paying themselves huge salaries and bonuses. We need an end to this damaging behaviour: a Robin Hood Tax for 2014!

Moving forward on the continent

Our story starts in Europe, where on the 22nd of January, a major milestone was passed when 11 countries agreed to forge ahead and implement an FTT.  Countries including France, Germany, Italy and Spain had decided to put people before the profits of their big banks.

But they hadn’t gone out on a limb. They knew there was support for the most popular tax in history and it came in July when 355 international organisations (from over 40 countries) representing over 200 million members signed a letter to show their support for the FTT. In August an international campaign (Million Strong) was launched, so far garnering over 632,000 voices supporting the European Robin Hood Tax.

The European Parliament reflected this groundswell and voted 3 to 1 for an FTT in the summer.

Meanwhile across the pond, the US campaign has enjoyed real progress. In February, a political delegation including European tax chief  Algirdas Semeta and Labour's Chris Leslie worked to persuade senators that a Robin Hood Tax was what the States needs. A few months later in Washington, Representative Ellison launches his Inclusive Prosperity Act, with the FTT centre-stage.

The UK government launched a legal challenge against the European-FTT, claiming that if implemented, it would damage the UK economy. With your help we went on the offensive – thousands of you took part in action to show the UK its outrageous they are blocking a tax that could raise us billions all to protect the vested interests of their friends in the City.  All of this culminating in a petition hand-in that a HM Treasury security guard described as looking like “a bloody book”!

Later in the year, a well-timed leak of a legal opinion coming from one part of the EU structure apparently (at least, according to some publications) heralded the ‘death of the financial transaction tax’. Commissioner Semeta, the European Parliament’s Socialists and Democrats Party, Vice President of the European Parliament (Anni Podimata) and the German Government swiftly rebutted these claims. Indeed, Ms Podimata then went on to travel to the US during a day of action, speaking alongside politicians and leaders of civil society (including renowned economist Jeffrey Sachs) to reaffirm international commitment to the European FTT and promote the idea of an American Robin Hood Tax.

Real progress has been made in the UK as well with almost 40 councils from across the country (representing almost 10 million people) getting behind the Robin Hood Tax. Councillors from nearly all of the political parties in every region have voiced their concerns over UK poverty and are urging Westminster to introduce this much-needed reform. It's a brilliant reminder than Britain is bigger than the Square Mile – it is time our Government started to act in the interests of us all and not just the vested interests of the financial elite.

By the end of the year, Germany’s new government had thrown its weight behind a financial transaction tax by declaring it a pillar of its new coalition agreement. This helped set the scene for the talks starting in Europe this month: the final hurdles to getting the tax we deserve.

We've prepared for what will no doubt be an extraordinary year: planning campaigns complete with some exciting new videos. But all of this planning wouldn't amount to much without our supporters. It's brilliant that we have come this far in the last few years, thanks to you and it's in the next few months that will prove decisive.

Previous : We demand an inquiry to expose banks' power over Parliament...
Next : How the gagging law will silence Sherwood