Why we marched against austerity (and will continue to do so) 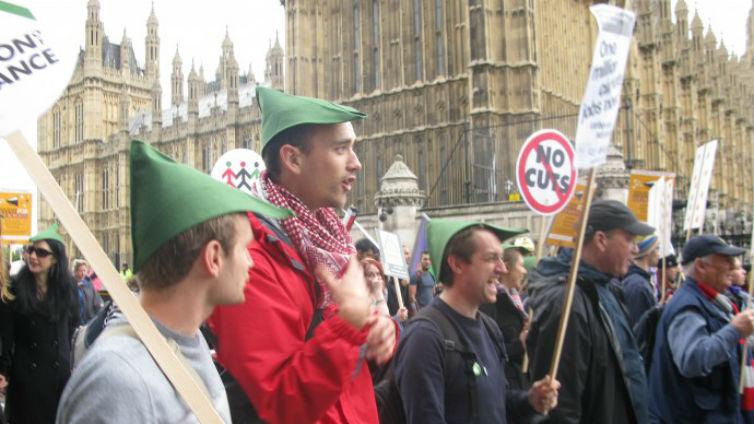 This Saturday, representatives from the Robin Hood Tax Campaign joined 50,000 people to march through the streets of London, calling for an end to government austerity measures.  We marched because we know there’s an alternative: a tiny tax on the banks that could help pay for public services and to fight poverty.

Arriving outside of the BBC’s HQ, we were surrounded by trade unions, church groups, campaigning organisations and thousands of others readying themselves to march on Westminster. From a platform near the front of the procession, we heard stories from representatives of community groups about how the cuts had affected their lives. Time and again, we heard how the country’s poorest and most disadvantaged were being punished for the mess the banks have made of the economy.

Marching down Oxford Street wearing our Robin hats, we spoke to passers-by about the Robin Hood Tax and brandishing our banner, demanding that banks pay their fair share. Arriving outside the Houses of Parliament, we were struck by the vastness of the demonstration: people from all over the UK had congregated in the capital to voice their anger.

We at the Robin Hood Tax think the public are right to be angry: We know the banks caused the crisis. We know the public bailed out the banks to the tune of a trillion pounds. We see our frontline services are being subjected to savage cuts. We will continue to fight these measures when we know there are alternatives.

We know what needs to be done to make the banks pay: a Robin Hood Tax.

Back the tax here.