Why we support the Robin Hood Tax 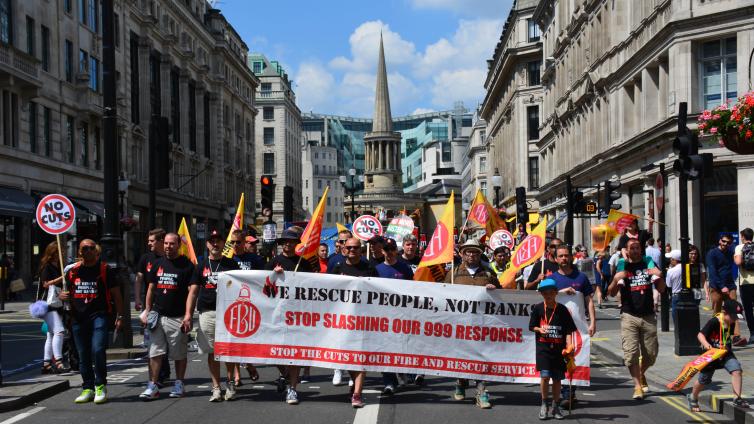 Public services in Britain and around the world are being decimated. The banking crisis of 2007/08 and the consequences of it have been used as an excuse by governments to make huge cuts. Falling living standards of working people have plunged many into poverty. The impact of these attacks cannot be understated.

In Spain in 2013, firefighters were sent to evict an 86 year old woman from her flat simply because she couldn’t afford to live there anymore, but firefighters came to her rescue. They refused to help make the woman homeless. Across Spain, firefighters began to adopt the slogan ‘Rescatamos Personas, No Bancos’  - we rescue people, not banks.

Here in the UK, the FBU have adopted that slogan too. We did not cause this crisis and yet it is our living standards that are falling, our pensions that are being robbed, our service being dismantled and our communities’ safety that is being put in jeopardy.

Our remit is clear - we provide a humanitarian service and our job is to save lives and protect our communities. Some politicians have tried to justify cuts to the fire and rescue service by saying fires and fire deaths are down. However, they fail to point out that firefighters performed some 38,000 rescues across the UK last year, with 10 percent of these at fires.

We do not accept the notion that we should pay for their crisis by having our living standards rolled back and our communities torn apart. There are plenty of resources in our society for us all to have a decent standard of living. The Robin Hood Tax is one example that proves this, globally it could raise £250 billion every year.

Firefighters and other public servants did not cause this crisis, it was City bankers and speculators. It’s high time they pay their share. After all we rescue people, not banks.